4 Rules That Will Change Your Life, by Tina Fey 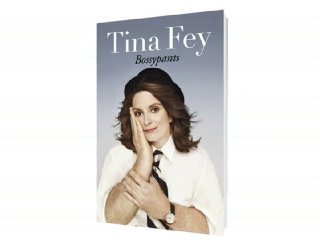 At my house Tina Fey is popular. I liked her back in the day, when she was Weekend Update anchor on SNL and REALLY liked her when I found out she was a writer who was strong armed by Lorne Michaels to get in front of the camera. We enjoyed 30 Rock way before it became popular. When Tina Fey accepted her first Emmy she said, “Thank you to all our viewers out there. All twelve of you!” My family was 33% of her audience. The college of his choice asked my son to write an application essay on “who, living or dead, would you like to spend an afternoon with and where would you take them?” Did he choose to take Akira Kurosawa to the East Village to check out the latest in independent film? No. He wrote, “I’d ask Tina Fey to spend the afternoon with me at Wegman’s.” My boy!

So of course I had to snatch up Tina’s book, Bossypants, first chance I had, on impulse at Target where I had gone for a lamp. Tina earned her show biz ‘cred’ at The Second City in Chicago, the theatrical incubator that produced John Belushi, Steven Colbert, Steve Corell and a million other wildly creative and successful people. Second City is all about improvisation, performing sketches without the support of a script. Tina says she learned important life lessons from improve. Just for fun, because it’s the weekend and “lighten up” time, here are Tina’s Rules with commentary from me:

Now obviously in real life you’re not always going to agree with everything everyone says. But the Rule of Agreement reminds you to “respect what your partner has created” and to at least start from an open-minded place. Start with a YES and see where that takes you.

Because my husband is a show-me-the-proof scientist it is sometimes hard for him to follow this rule. When we were first married I would say something like, “Wouldn’t it be nice to have a little pied-a-terre in Manhattan?” he’d respond, “You know we can’t possible afford that,” as if I were about to call up Donald Trump that minute to ask if he had any extra space in his Tower! Having kids has expanded his thinking to allow more Yes. With kids fingers are always something other than actual fingers. They are rayguns, or dinosaur claws or beams of sunshine or flower petals. The only response to that is, “Yes, of course!”

To me YES, AND means don’t be afraid to contribute. It’s your responsibility to contribute. Always make sure you’re adding something to the discussion. Your initiations are worthwhile.

Just the other day, my husband and I were walking in the Conservatory Garden in Central Park. I sighed and said, “There are so many places in New York that I love. If you could live anywhere in Manhattan, where would it be?” I was taking a chance because make believe isn’t my husbands strong suit (see above). He delighted me by pointing to the top floor of a high rise on Fifth Avenue. He said, “Right up there so that I could see this garden every day.” Progress!

Rule #3. MAKE STATEMENTS. This is a positive way of saying “Don’t ask questions all the time.” If we’re in a scene and I say, “Who are you? Where are we?” “What’s in the box?” I am putting pressure on you to come up with the answers.

In other words: Whatever the problem be part of the solution. Don’t just sit around raising questions and pointing out obstacles. We’ve all worked with that person. That person is a drag.

A pet peeve of mine (I have so many) is when people talk in question mode when they mean to make a statement. “I used to be a lawyer? But now I’m a stand up comedian?” Arg!

Thomas Edison famously said he did not fail to make a lightbulb 1000 times. He simply learned 1000 ways NOT to make a lightbulb. For most of us, when we feel like we’ve made a colossal mistake, we want to distance ourselves from it as soon as possible. It takes a cool head to stick with it long enough to get beyond the mistake and find the lesson, opportunity or discovery that it is waiting to be revealed!