7 Ways to Get In Touch With Your Inner Bitch 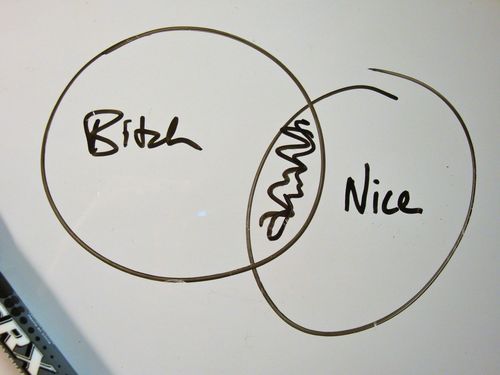 I don’t know about you, but for the longest time, I was afraid of my inner bitch.

In the old suppressed, sexist tradition of ‘you’re either a whore or a saint’, girls are too often taught that we are either ‘nice’ or ‘bitches’ and never the twain shall meet. (Guys might struggle with this too although I think boys have a slight advantage because generally  they are allowed to be angry, whereas girls – not so much

Given all this, it is not surprising that when I was growing up I felt it necessary to suppress any snarkiness. It was hard when what I really wanted to do was say something catty or roll my eyes or even admit out loud that I was so much hotter than Lisa, my high school nemesis. Good girls just didn’t do that!


Was I evil because sometimes the shrew just had to make an appearance?  It was confusing back then when anything that comes out of my mouth with and sharp edge was taken as anger and nice girls just didn’t get angry. They cried. If I had a nickel for every time my brothers called me a bitch, I’d have a nice plump mutual fund. And, as you probably know, being called a bitch, when all you want to be is a nice girl, is like being slapped in the face. Naturally, I tried to avoid it.

What’s a nice girl to do? I don’t recommend being hard on yourself (like I was), especially if, at heart, you know you are a truly nice person.

7 Ways To Embrace Your Inner Bitch

Think of it this way:

1.  Don’t be afraid of your bitchiness. Contrary to what your mother told you, you can be nice with sass. The bitch will not take over.

2.  If you’re feeling snarky think of it as comic relief or the spice that makes a ‘nice’ girl interesting. Our inner bitch is usually edgy and funny if you give her a chance.


3. You don’t have to say it out loud. Give yourself permission to be as bitchy as you want to yourself. As long as no one’s being hurt, mumbling or rolling your eyes out of anyone’s view is OK. “Did you just say Maureen is a whore?” [Did I say that out loud?] “OH NO! I just said she’s such a bore!” Or…

4.  Confide your not nice comments to a trusted confidant who gets it. Just be really, really careful about email or texts. You never know where they will go next.

5.  Only you should be allowed to call yourself a bitch in a serious manner. If anyone else says that you are being “a bitch” without a trace of humor, or badly disguised as teasing, think about it. Is it possible they are uncomfortable for another reason? Does your anger make them squirm? Is keeping you “nice” a way of exerting control over you? There is power in expressing righteous anger, could they be afraid of yours?


6. Choose a partner who appreciates all sides of you, including your inner bitch. Early in our marriage my husband observed that I had just cleaned the dishes. He said, “Good girl!”  I snarled back, “What am I, Lassie?” He burst out laughing, and I smiled back because I knew I had a chosen well.


7.  Most important: Trust yourself to keep healthy limits on your inner bitch. You will not go overboard.


So let the bitch out. Set her free! Feel the power and enjoy! Believe me, it will be a relief to finally let her go and be your own good – and nice – self.

Originally published October 2009 by Dr. Aletta as  5 Ways to Get In Touch with Your Inner Bitch