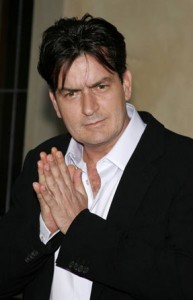 In one of the myriad interviews he gave over the last week, Charlie Sheen said clearly that he hates AA. Here are a few possible reasons why he would hate AA so much:

A lot of people have trouble with Alcoholic Anonymous. AA is full of people and people can be messy and flawed.

The human train wreck formally known as Charlie Sheen is a common sight in the AA meeting halls. The only difference between Mr. Sheen and other self-absorbed, delusional, frantic addicts is the size of the audience to which they rant. These people do not last long in AA. They mock the Fellowship and the 12 Steps as too religious or simplistic. AA is beneath them.

People can get sober without AA. It is not necessarily for everyone, by any means. Even so, I have a deep respect for it.

For a few years after getting my B.A. and before going to graduate school, I was a substance abuse counselor at the Substance Abuse Center of Johnson County, close to Kansas City, Kansas. What I learned there was worth five Ph.D.s. Not being an alcoholic and because I thought it was important for me to know what it was I was prescribing to my clients, I attended a bunch of open AA meetings. The members made me feel welcome everywhere I went. One of my proudest possessions is my 30 day coin.

What did I learn? I learned that you can’t just go to one AA meeting and think you know AA. Every meeting, every location had its own kind of culture. There were the hard-core biker meetings, the white-collar professional meetings, the women’s meetings, huge open meetings, more intimate closed meetings…. you get the picture. There were also the religious meetings, yes, and the agnostic ones. I learned my higher power did not have to be God in the Judeo-Christian tradition, although a lot of people were comfortable with that. If I wanted my dog Snoopy to be my higher power I was encouraged to go for it, as long as I gave up my need to Control and give in to my higher power.

I learned that AA was a great leveler. Everyone was the same, the lawyer and the short order cook, the doctor and the housewife. Each equally brave, each deeply respected for the courage it took to just show up.

Sadly, all this Mr. Charlie Sheen, gripped by his illness, cannot comprehend. It must be terrifying for him to imagine a place where he would no longer be CHARLIE SHEEN.

He would just be Charlie.