Fighting In Front Of The Kids 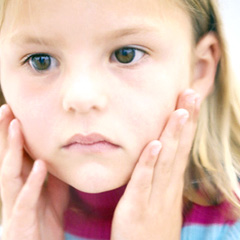 Recent studies show that when parents fight regularly in front of their kids, purely verbal down and nasty fights, the children's emotional suffering is as though they've witnessed physical abuse.

My parents justified having some horrible arguments in front of us saying we needed to see that adults could argue, resolve their differences and still love each other. Somehow that wasn't comforting when I saw my Mom reduced to tears by my Dad's callousness (and she could give as good as she got, believe me.) Those arguments didn't occur often but when they did they were terrifying.

It is true that role modeling the expression of honest differences of opinion, respectful negotiation, friendly, even if heated, discussion and resolution could benefit a child's perception of what it's like to be in an adult relationship. That's good communication.

But when we slip our leashes, raise our voices, use ugly language, communication has stopped. People delude themselves by thinking, "If I just banged my head against this wall harder and louder something will change for the good." The only thing that results from parents behaving badly is a child's broken heart.

For tips on how to avoid this pitfall read, The Dangers Of Arguing In Front Of Your Kids