5 Ways To Avoid Procrastination – Get Started!

My friend, Carolyn Thomas, of Heart Sisters, posted a comment on my recent article 3 Ways To Avoid Procrastination. 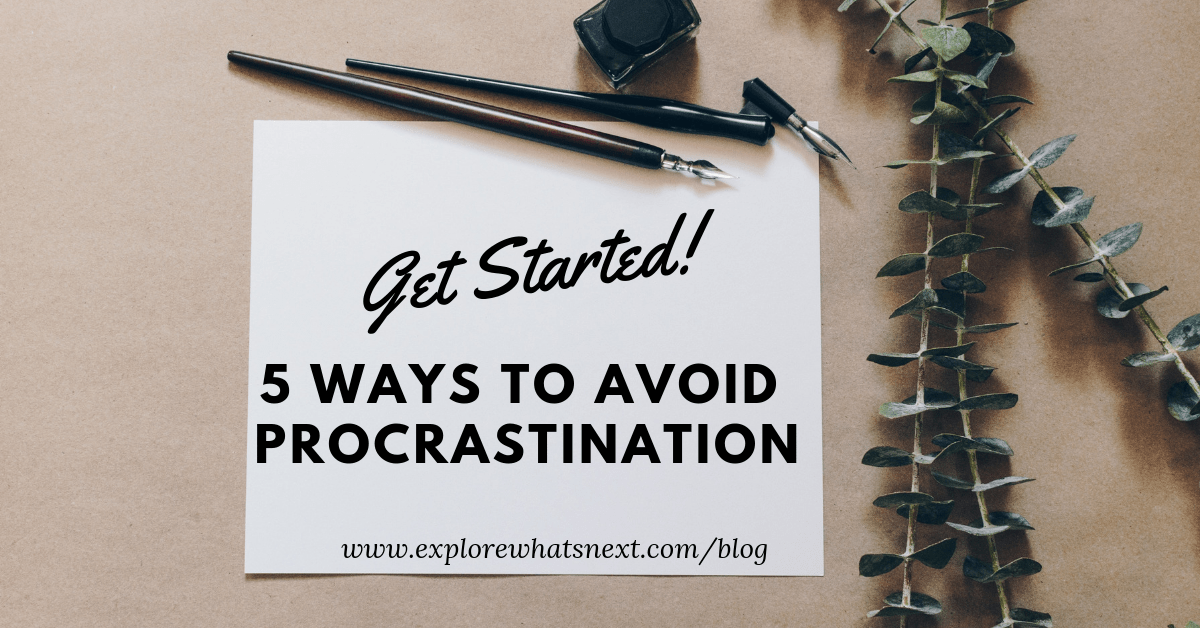 Sisyphus and his rock had nothing on me. This week is my daughter’s second wedding anniversary. I’m embarrassed to admit that for two years, I’ve had two (empty) photo albums I’d offered to complete for her (plus 600+ wedding photos) sitting in a big basket full of (expensive!) wedding-themed scrapbooking embellishments in the corner of the living room, all of it reminding me every time I pass that corner of the room that this task is HOW long overdue?!?!

I know, I know, I know – if I would only pull it all out onto the dining room table and just get started (as you point out in #2), I could polish off this creative project in due course – and probably actually have fun creating it.

I do have a beaut of a procrastination excuse, however. On her wedding day, her Dad became very ill. He managed to walk his only daughter down the aisle before one of our guests (a physician) insisted that he needed to go straight to the hospital, where he underwent emergency surgery and stayed in Intensive Care for over two weeks, seriously ill. So instead of leaving on her honeymoon, our daughter sat vigil with her new hubby at her Dad’s bedside for those two weeks.

As you can imagine, when we look at those wedding photos now, it brings back a nightmarish memory of a day that started off so beautifully but ended with such high drama. Hundreds of photos of her smiling a frozen little pasted-on smile, trying bravely to get through the reception, the dinner, the endless speeches, the party afterwards – when really all she could think of was her Dad who wasn’t there. I dread looking at those photos of her – and let’s face it, she’s in almost every one!

The timing of your post is near-perfect – just the boot in the bum I need. Thank you for this!
regards,
C

Thank you so much for sharing your story with me. I sincerely hope your daughter’s father is well and able to enjoy her second wedding anniversary with the family.

What a doozy of a procrastination excuse! That’s how sneaky and devious that Anxious Avoidance Voice can be. It can hit us where we live so that we’re convinced that avoidance is the right thing to do. Reading your story, anyone with a heart would say, well, of course you don’t want to look at those photos! Put them away! Don’t suffer looking at them. A lot of us can identify with your situation. I spent well over a year avoiding cleaning out my father’s clothes closet after he passed away and felt terrible about it every time I walked by.

I am so happy that the Avoid Procrastination article inspired you! It sounds like you’re determined to get your project done now! I came up with a few more suggestions (see below) that I hope will make your Sisyphean task a bit easier, not just for you but for any of us who are faced with a similarly painful, long avoided project.

1. Know that getting started is the hardest part. There’s this thing called entropy. It’s a physics thing but I believe it applies to emotional energy as well. When NASA needs to blast a satellite into space, it takes massive amounts of rocket fuel to push out of the pull of Earth’s gravity. That huge effort then dissipates once the satellite is in orbit. Procrastinating anxiety wants us to think that the same huge effort it takes to get started will be needed throughout the execution of the task. That is just too much for anyone to bear! The truth is that once you are out of the sticky pull of doing nothing, the energy needed to keep your momentum, to keep on course, is nothing compared to the initial, getting-started effort.

2. Round up a friend to help you blast out of entropy.  Someone who knows the story and knows you, but isn’t as intimately involved. For me it was my older sister who came from across the country specifically to help with my procrastinated task. Make a play date just to get good and started. Order in a simple lunch, snacks or drinks to make it as fun as possible! Explain to her that the focus is on getting the project done, period. The right friend will kindly and gently keep you on track. I wish I could send you my friend Linda because she would be perfect for this. I’m hoping you have your own Linda you can count on.

3. Break down the big project into discreet tasks or by time. You don’t eat by swallowing a meal whole. In the same way you can’t get a dreaded project done in one sitting. Write down the steps it will take to get the project started. Not done-done (that could be overwhelming). Just those things to get started. My list included calling charities to see who had a pick-up service to make it easier on us to give my father’s things away. Just making those phone calls gave me a sense of accomplishment.

You can also set a time limit to devote to the project on any given day. Tell yourself, I will do this thing for ten minutes and set a timer. When the timer goes off, you’re done! Keep your time limit to no more than two hours a day! I mean it now! Even two hours is pushing it. If you go over be sure it’s because you are absolute, positively enjoying yourself. Even then, take a break, go have some tea in the garden, then, if you choose, you may come back to it. Having that friend present helps immensely to keep both of you in a balanced schedule.

4. End on a high note. My horse-riding trainer told me more than once that when you are learning a new skill you want to stop the exercise after a success! The brain remembers the last thing associated with the task, so why not make it, “Boy, that felt good!” In addition to boosting our confidence, returning to it is much easier.

5. Give yourself rewards. Any animal behaviorist will tell you that when your pet does anything well you give it a treat (see above), even if that treat is a simple pat and “Well done, sweetie!” That good old positive reinforcement! We, humans, suck at it. For some reason, we’re always drawn to the negative side of things. We throw ourselves into work until we are exhausted and it’s still not enough. It’s punishing! No wonder we’d rather do nothing.

To take on a procrastinated task we need more carrot than stick. We’re already beating ourselves up for putting things off. Who needs more of that? When we do something very hard let’s reward ourselves every step of the way! I naturally go to food as a reward, chocolate being a favorite, but just like dog or horse training, the reward is probably even better when it’s a simple, sincere acknowledgment that we have done something heroic! So once in a while stop and smile to yourself, place a hand over your heart, take a deep breath and say: “I am awesome!”

To Lift Your Mood Break Out the Tunes!