Why Making Mistakes Can Be Good For You 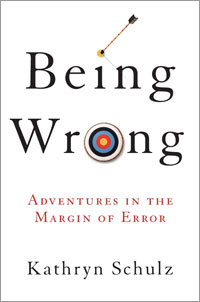 Thank God my parents supported the idea that with mistakes comes opportunity. The messier and more public the gaff the more profound and significant the lesson learned. You can imagine how much grief this philosophy saved me as a kid.

Last week, not just one, but two books came out that focus on what it means to make mistakes, “Being Wrong,” by Kathryn Schulz, and “Wrong,” by David H. Freedman. Dwight Garner, of the New York Times, wrote a review of both in To Err is Human – And How! And Why. Garner clearly liked Ms. Schulz's book better. He says:

“Far from being a sign of intellectual inferiority, the capacity to err is crucial to human cognition…

Thinkers have toyed with theories of error since Plato’s time, many of them generally agreeing with Albert Einstein, who said, “If we knew what we were doing, it wouldn’t be called research, would it?”

'Being Wrong' is optimistic. “Error, even though it sometimes feels like despair, is actually much closer in spirit to hope,” Ms. Schulz writes. “We get things wrong because we have an enduring confidence in our own minds; and we face up to that wrongness in the faith that, having learned something, we will get it right next time.”

With compassion and forgiveness we may allow ourselves to be human, make mistakes and learn from them. Then, as the old song advises you can, "Pick yourself up, dust yourself off and start all over again."