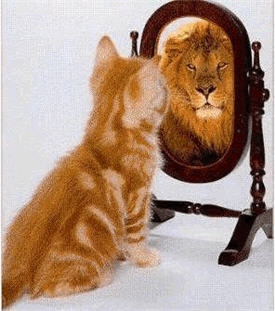 How would you rate your self-worth?  Many of us were reared to be self-effacing.  "Oh, no, I'm not pretty, clever, smart, nice…"  To do otherwise would be conceited.

I don't know you, but I do know this, you are not stupid, ugly or a failure.  You know this, too.  Your true voice whispers, "I am good, I am smart, I can succeed."


1)  Tune in, like you would a radio dial, to the voices in your head.  How are they sounding?  Supportive or nasty?  Sometimes we aren't even aware of how cruel we can be to ourselves until we detach just enough to hear it as an observer.  Write some of it down and let that help you realize the extent of the verbal self-abuse you've been sustaining.  During an episode of depression I did this and was surprised to learn how unkind I was to myself.

2)  Whose voice is it?  It isn't yours, because yours is thoughtful, even when you need a kick in the butt.  Often the harsh voice is a parent or other adult caregiver.  When we're kids our brains are sponges that soak everything up including the repeated criticisms.  It helps defuse the negative voice further by identifying where it came from, to realize its origin was outside of ourselves.

3)  Talk back.  Challenge the put downs.  Dialog boxes are helpful to exercise this new skill.  On a piece of paper draw two columns, on the left write whatever the nasty voice is saying (try to keep it to a sound bite).  On the right come up with a more reasonable response.  An example of this might be:

"You are such a loser!" vs. "I could do better and I will next time. That doesn't make me a loser."

Go back and forth, from left to right, writing the dialog, until you feel a sense of mastery over the negative voice.

4)  Stop using absolute language, and I don't mean the vodka.  Avoid words like "always, never, can't, forever."  These words leave no room for hope; they are toxic when applied to ourselves.

5) Turn the volume up on your true voice. A good friend pointed out to me that the way I was talking about myself was unacceptable.  "No one talks to my friend like that!" was what she said.  This was such an eye opener I took it a step further.  If it were my friend who felt like a failure what would I be saying to her?  It sure as hell wouldn't be "Yeah! Loser!"  Wouldn't I be busy pointing out all her strengths and good qualities, bucking her up, showing support?  Yeah, that's what girlfriends do.

6)  Cope Don't Mope!  This is straight out of Dr. David Burn's, Feeling Good (pages 70-80).  We are none of us perfect, we all could improve in some way.  Instead of focusing on the unreasonable notion that we are always bad, doesn't it make better sense to say, "I'm not as good as I'd like to be, I'd like to do better.  How can I do that?"  Then devise a reasonable plan to improve.

Do these exercises faithfully by yourself, with friends or family if that helps, even with a therapist.  Like exercising muscles, you get stronger bit by bit, day by day at first sort of awkwardly, until one day you automatically think the positive, not the negative, and surprise yourself with good self-esteem.

Watch your stock go up!