What We Can Learn From Dumbo’s Feather 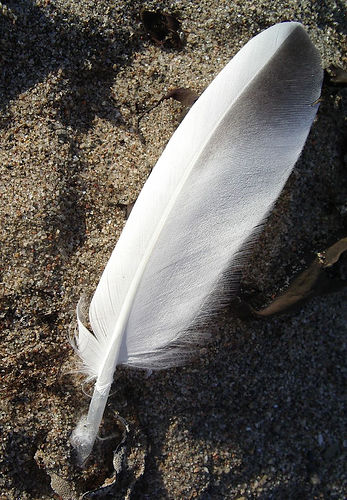 Remember Dumbo? It was an animated film by the Walt Disney Studios released in 1941, recently re-released in DVD. Let me tell you the heart of the Dumbo story. I think it has a significant take-home message that we could all use.

Mom is torn away from Dumbo (tear jerker!) leaving the abandonded baby a virtual orphan with no means of support. He is forced to become a clown elephant, poor little guy. A helpful circus mouse (Disney, remember?) points out that if he opened up his giant ears he could fly and thus become a big star. Dumbo, being no dummy, disagrees, until the mouse says he’s got a magic feather. If Dumbo would just hold the magic feather in his trunk, open up his wings and jump off the high-dive platform, he would fly.

Desperate to get away from the creepy clowns, Dumbo gives the magic feather a go. He takes a leap of faith.

His big ears hold the air and off he goes flying all over the Big Top, strafing the clowns with popcorn! Dumbo becomes a big star!

Weeks, months go by. Convinced that the magic feather is what keeps him afloat, Dumbo continues to fly. One fine day, flying along at cruising altitude, a strong wind whisks the feather out of his trunk. Horrified, Dumbo drops like a stone. The mouse, hitching a ride in his hat, screams at Dumbo that the feather was a trick, a ruse, a lie! He could fly without the feather!

Could this be true? At the last possible moment, just before he and the mouse would go splat all over the sidewalk, Dumbo opens up his giant ears and soars!

Recently I shared this story with a few clients. They were talking about people, places or things they felt they needed in their lives to function. Without these people, places or things, my clients were convinced they were incompetent, incomplete wrecks. Their Dumbo feather could be a person close to them, a relative, friend, or spouse. The relationship began as friendly and somehow evolved to dependent. The Dumbo feather could be a job that keeps them down or a house with so much sentimental baggage they can’t let it go.

What would happen if we let go of our Dumbo feather? That’s not to say we need to end the relationship, although in some cases that might be the best thing. Usually it just means daring to make a decision without consulting with so-and-so first or beginning a job search, even exploring starting your own business, while holding onto the one that is needed to pay the bills. Daring to imagine a successful life without clinging to our feather could be one of the bravest things we ever do.

Without our feather we can still fly!