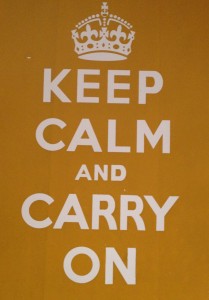 Two years ago my little family was driving toward New York City from our home upstate. Our intention was to help my son move into his freshman dorm at NYU. On the radio we heard newscasters and meteorologists warn about a giant hurricane, Irene, heading straight for Manhattan. It was going to cause wind damage, flooding, mayhem and disaster of epic proportions!

My son from the backseat was clearly anxious. He asked if we weren’t out of our minds heading INTO the path of the mega-storm instead of AWAY. My husband and I assured him that over the top weather predications rarely live up to their hype. In our experience the storms that really were disasters came without warning. The ones where we had days of dire predictions before the fact ended up being a well-within normal day.

Nonetheless we weren’t complete idiots, like those crazy-heads who decide hurricane warnings are synonymous with “Surf’s up!”  We knew the place we were headed in NYC was inland and uphill from the beaches and we had plenty of food and videos to while away the ‘batten-down-the hatches’ phase of the storm.

Result? Irene was a big ‘meh’ in our neck of the woods. Where she did cause damage no amount of anxiety building prior to what happened could have made it better.

Today Hurricane Sandy takes center stage and the predictions are wild! Even the news agencies are recognizing they may have stepped over the line in the hype. CNN has banned the neologism ‘Frankenstorm’ from use. At the Washington Post, opinion blogger Erik Wemple wrote a piece called “Hurricane Sandy: Five Tips For Avoiding Hype,” a great guide for reporters but also for us common folk who don’t need anything extra to worry about. We’ve got enough on our plates, thank you very much.

Instead of churning up anxiety by watching hysterical weather men on television, remember that British World War II sign that you see everywhere these days. Keep Calm and Carry On!

A good stock of flashlight batteries, canned soup and milk isn’t a bad idea either.