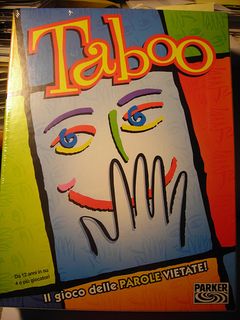 Looking for a cheap thrill?

Get some friends or family members together and break out a game.

Just about any game would do but for maximum make-a-fool-out-of-yourself potential I recommend Taboo, Cranium or Pictionary.

A few months back, in the depths of the recession, a friend suggested that instead of going out to eat , we go easy on ourselves, do pot luck and play games. Corny, I thought, but what the heck, I'll try anything once. It turned out to be a brilliant idea.

The other night we had our third such get together. I ordered some wraps from Wegman's, someone brought a salad, someone else fruit and dessert and each couple brought a bottle of wine.  After noshing on the food and catching up on what everyone's kids were doing, it was time to break out the Taboo.

I don't know what it is about these games. With the right mix of people, playing them unleashes the clown, the child, the clever and the village idiot in all of us. We laughed so hard, my poor dog thought something was seriously wrong with us.

Bonding through laughter is a wonderful thing. What's your favorite game?