You’ve Been Ghosted!  5 Things to Do Next

Being ghosted is a new concept that has emerged from modern day dating, and it’s not here for the better.  How do you know that you’ve been ghosted? Maybe you’ve been going out with someone pretty regularly for weeks, or even months.  You’ve been having a great time in Buffalo, going out every weekend, checking out the North Park Theatre on Hertel Avenue, getting some poutine in Allentown, meeting each other’s friends.  And then they just disappear from your life, without any warning or explanation. The person you were dating suddenly stops responding to your messages, isn’t taking your calls (if you still call people), and may have blocked you on all social media.  Like a ghost, it’s like they were never really there. It can be incredibly hurtful when this happens, but for some reason it’s become a “dating norm” in our society. If it’s happened to you, you don’t need to stand by and let self-criticism consume you.  I’m proposing a new regime of self-love and empowerment. 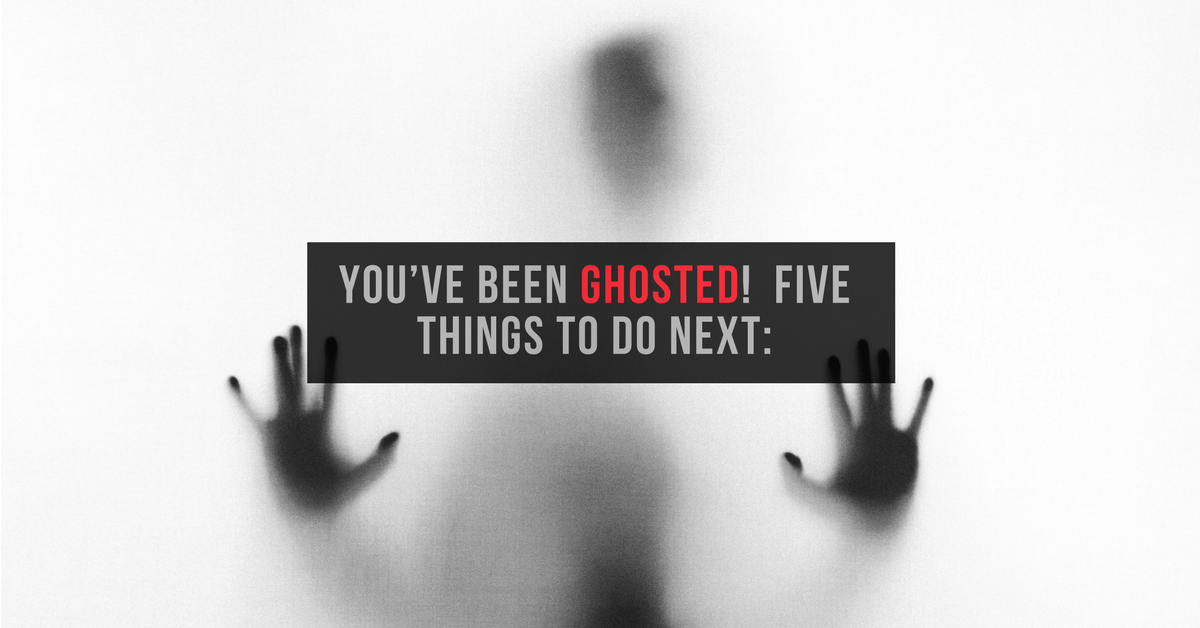 Here are five things to do after you’ve been ghosted:

1) Have the last word and love yourself for it.  Ghosting doesn’t have to be okay with you!  Yes, a lot of people do it now, and they’re starting to think that it’s okay.  I’m calling bullshit on that. If two people are dating or engaging in an intimate relationship, they both deserve a goodbye when it comes to an end.  If you don’t like people ghosting you, set the standard that it’s not okay. When you realize you’ve been ghosted, send a final message to the person. This final message isn’t for you to be vindictive; it’s to say how you feel while being calm and tactful.  It’s to show yourself the self-love that you deserve. You can say something like: “Hey.  I’m assuming at this point that I’ve been ghosted, and that’s hurtful to me.  I’m not hurt because you’re out of my life, I’m hurt because I deserve more respect than this.  I deserve a goodbye. I deserve someone who cares about me. I realize now that that person wasn’t you, and I’m okay with that.  I hope in the future you can respect who you’re seeing enough to say goodbye.”  I’m not saying this is going to make a huge difference in the ghost’s life, but if it helps you reinforce your worth, then do it.

2) Remember people ghost because of their own problems.  It’s them as often as it’s you.  A lot of people who get ghosted feel like it’s their fault.  They feel like they’ve done something wrong, and they have no closure to manage their feelings.  I’m telling you that a lot of people who ghost usually do it all the time, like a pattern, and it can be because of some personal issues that they have.  They might not be ready to have a relationship, or they might be scared to commit, or have any type of deeper emotional connection. People who ghost might only see the flaws in others, and make excuses to end the relationship without talking about it.  Don’t beat yourself up—remember that it takes two people to end a relationship.

3) Accept the reality.  You may never find out why you were ghosted.  And you don’t really need to know why. So many times, people ask why, and it’s not the “why” that matters.  What matters is what actually happened and where you can go from there. What happened was you were ghosted. The ghost could have been an asshole, or maybe it was someone who is actually a good person, but too emotionally distant to handle saying goodbye to someone.  You don’t need to know. Focus on loving yourself and being kind to yourself.

4) Take care of yourself.  Self-care is so important, especially after a letdown like being ghosted.  Self-care can mean something different for everyone. It could be journaling, taking a hot bath, going for a walk with your dog, going out to dinner with your friends, organizing your closet, or buying something for yourself.  Self-care is setting aside time to do something just for you, not for anyone else. Remind yourself why you’re great! Make a list of your positive qualities, as corny as that might sound. Ask your friends and family what they love about you.  This stuff works, trust me.

5) Get back out there.  So, you were ghosted, but that doesn’t mean it’s time to throw in the towel.  After you’ve accepted what’s happened and done your self-care, it’s important to start meeting people again.  You can begin dating again with a new mindset about what you want. You can meet someone new and immediately set the standard that you want open communication from the beginning.  Communicate with people in the way you want them to communicate with you. If you’re not being authentic and open, how can you expect someone to reciprocate? Ghosting is how people end a game, not a relationship.  Make it clear that you’re not playing any games, and never stop loving yourself through the process.

If you try these tips and they don’t work for you, don’t despair.  If you’ve vented to your friends and family, and are still struggling to move forward, it doesn’t mean you’re destined to be alone forever.  Dating today can be hard. Loving yourself today can be hard. If you need more support, give Explore What’s Next a call. That’s why we’re here.

Christine understands what it’s like when you’re trying your hardest and an invisible hand is holding you back. It doesn’t mean you’re weak, or stupid, or unworthy of good things—it just means you could use some help. It helps to connect with someone who knows that your stories are worth listening to. Christine will hear your story. She’s a great listener.

Christine is easy-going, friendly, empathetic, non-judgmental. She’s funny and real in a down to earth way. She loves working with pre-teens, teenagers, and young adults to help them move through those difficult life transitions where a person can feel lost.

With Christine’s guidance and encouragement you can take the first step to a happier, healthier life.

The Power of Checking In … With Yourself