While Guilt Might Be Good For You, Shame Still Isn’t

Guilt hurts so many so much.  In my work I often see guilt experienced as a punishment without hope of redemption. When a patient is having a hard time dealing with guilt, I ask them to replace the word ‘guilt’ with the word ‘responsible.’ Instead of saying, “I feel guilty for hurting my mother’s feelings,” they will say, “I am responsible for hurting my mother’s feelings.” Then we look at whether or not it is reasonable to feel responsible.  By making that little word substitution my patients report, it is easier to detach just enough from the negative emotion to think rationally. They become empowered to do something about the guilt, not just sit with it. Being responsible makes us adults, feeling guilty often makes us feel about nine years old. 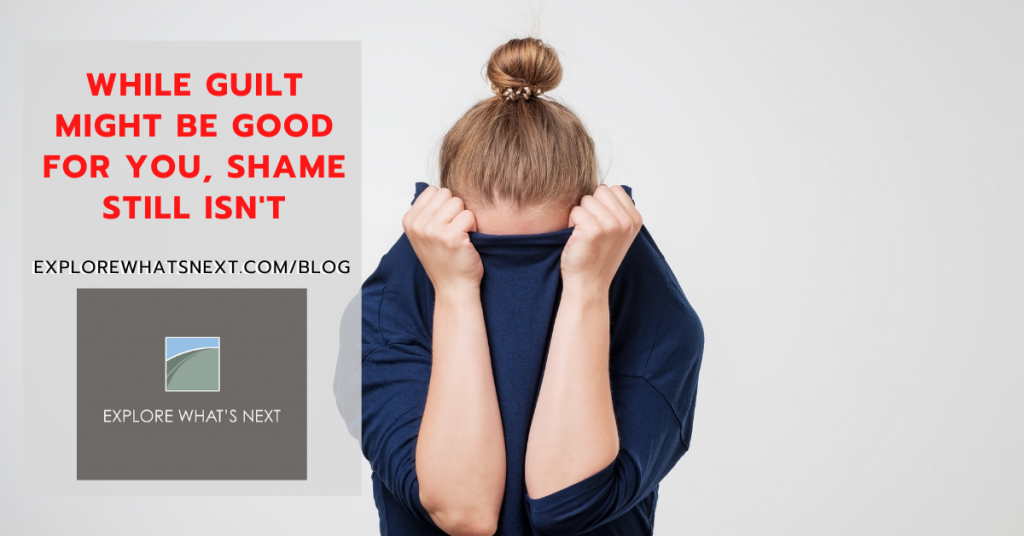 A study recently reported by John Tierney, science writer for the New York Times, suggests that guilt has its good points as long as we are allowed to make amends for whatever wrong made us feel guilty in the first place. Here’s an excerpt from Guilt and Atonement on the Path to Adulthood:

“The key element is the difference between shame and guilt,” Dr. Tangney says. Shame, the feeling that you’re a bad person because of bad behavior, has repeatedly been found to be unhealthy, she says, whereas guilty feelings focused on the behavior itself can be productive. But it’s not enough, Dr. Tangney says, for parents just to follow the old admonition to criticize the sin, not the sinner. “Most young children,” Dr. Tangney said, “really don’t hear the distinction between ‘Johnny, you did a bad thing’ versus ‘Johnny, you’re a bad boy.’ They hear ‘bad kid.’ I think a more active, directive approach is needed.”

She recommends focusing not just on the bad deed, but more important, on how to make amends. “Both children and adults can be surprisingly clueless about whether and how to make things right,” Dr. Tangney said. “Little kids are overwhelmed by the spilled mess of milk on the floor. Parents can teach and support them to say ‘I’m sorry’ and to clean it up, maybe leaving the kitchen a little cleaner than it was before.”

In other words, guilt can be resolved effectively if we are allowed to make the misdeed right.

As Lisa Miola Furrier wrote on my Facebook page

“…if you give kids the message ‘you make a mess, you clean it up’ they feel empowered to not ‘carry the guilt’ into self shame …”

Yup, that’s it.  And, while it might sound corny, it also makes sense for us adults who are learning to be good parental figures to our own inner-child. As long as we can judge that taking responsibility and making amends is reasonable, we can atone and heal, escaping the trap of shame. If we decide the guilt is unreasonable, we may be free to let it go.