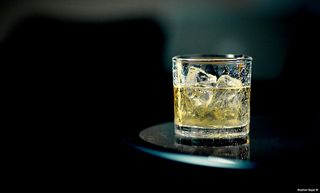 Wine and spirits are among the finest gifts God gave to humankind. When we can enjoy them in moderation it’s a wonderful thing. Unfortunately, the line between social drinking and problem drinking can be very thin. The line between problem drinking and alcoholism is thinner still. People who abuse alcohol know this, so they deny, deny, deny there is a problem with their drinking.

Here’s a hint to anyone who secretly thinks they might have a problem with alcohol: If you’re thinking it, it’s a problem. If someone, anyone has shown you concern about your drinking, IT’S A PROBLEM!

We have a serious social issue in this country which is: if you want to be social, drinking is usually involved and too often it gets out of hand. I hear this from college students, young professionals, seasoned businessmen, even stay at home moms! If everyone around you has a drinking problem does that mean you have less of one? This is not to pronounce judgment. It’s just a reality check.

There was a time when I was in college, I couldn’t go to sleep without a drink. I had a stash of cheap wine in my one room walk-up. One night the bottle was empty, I’d forgotten to get more, and I freaked out. First I freaked out that I didn’t have any wine and it was too late to get any. Then I freaked out that I was freaking out. It was the first time (not the last) that I realized I had it in me to become an addict.


People who abuse alcohol may experience many of the same signs and symptoms as people who are dependent on alcohol. However, alcohol abusers don’t feel the same compulsion to drink and usually don’t experience physical withdrawal symptoms when they don’t drink.

Your drinking is a problem if…

1)  Your friend, spouse, co-workers, kids say your drinking is interfering with your life.

2)  You hide your drinking, drink alone or in secret.

3)  You get defensive when someone shows concern about your drinking.

4)  You’ve called in sick to work or not gone to class because of the result of drinking too much.

6)  You’ve ever driven when you felt buzzed.

8)  You have legal problems due to drinking, even indirectly.

9)  You were warned at work that it could be a problem.

10) Your drinking causes you shame or guilt.

11) The point of most of your drinking is to get drunk.

13) If you’ve ever had sex with someone you wouldn’t normally.

14) You drink to take the edge off, because you’re tired or upset.

15) You drink to be more social, more outgoing more ‘yourself.’

16) You can’t drink just one. Once you start you lose track.

17) You have problems at school or college because of drinking.

18) You make a ritual of having drinks before, with or after dinner and become annoyed when this ritual is disturbed or questioned.

19) If you’ve hurt yourself or put yourself in a potentially dangerous situation as a consequence of drinking.

20) You need to drink more to get that buzz.

If you said ‘Yes’ to any of these signs you have a problem. You need help before your drinking becomes severe enough to cause life endangering behavior and serious medical and social consequences.

Almost half of all people with drinking problems also have problems such as depression, bipolar disorder, panic disorder, or anxiety disorders. Self-medicating with alcohol feels like it’s working at first but eventually drinking makes symptoms of mental health
problems worse.

How to get help. When you are ready to find help I suggest you talk with either your primary medical doctor, nurse practitioner or physician’s assistant. Hopefully you have a relationship with these people and you can be assured that they will honor professional confidentiality.

You can check the WebMD website which has an Alcohol Abuse Health Center with many resources and information.

Be careful about stopping ‘cold turkey’ on your own. Depending on the degree of alcohol abuse, withdrawal from alcohol can be severe. WebMD says, “While some people can stop drinking
on their own, others need medical help to manage the physical process of
withdrawal.”