Tips to Find A Good-Enough Doctor 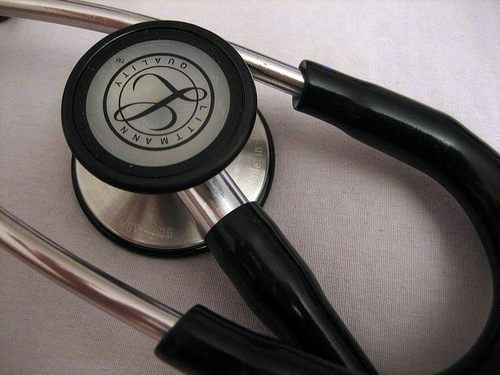 When
you have chronic illness your relationship with your doctor is second
only to your spouse or your parents. Being honest (and you must be
honest!) with that person means being able to trust them to
hear you.

In my CI career I fired
three highly recommended specialists because they were rude assholes.
Thankfully I’ve also had wonderful physicians who literally saved my
life and my mind. Not uncommonly for people with chronic illness, the path to find a good-enough doctor is an odyssey.

Laura Hillenbrand, author of the fabulous book Seabiscuit: An American Legend, was diagnosed with Chronic Fatigue Syndrome but not before she was put through all kinds of humiliation by physicians who out of ignorance did not listen to her.

"The doctor I found waved me into a chair and began asking
questions and making notes, pausing to rake his fingers through a
hedge of dark hair that drifted onto his brow. He ran some tests and
found nothing amiss. He told me to take antacids. A few weeks later,
when I returned and told him that I was getting worse, he sat me
down. My problem, he said gravely, was not in my body but in my
mind; the test results proved it. He told me to see a psychiatrist."

Ms. Hillenbrand was 20 years old. At 5' 5" her weight had dropped to 100 pounds. She suffered from chills, fevers,
exhaustion, swollen lymph nodes and dizziness. Being young and alone, she went to the recommended psychiatrist. After a thorough assessment:

"He wrote my internist a letter stating that he
would stake his reputation on his conclusion that I was mentally
healthy but suffering from a serious physical illness."

"'Find another psychiatrist,' my internist said over the phone, a
smile in his voice."

Ms. Hillenbrand went through two more doctors before she found the good-enough one at Johns Hopkins. He listened to her, read all her documentation and correctly diagnosed her condition.

Recently
a client of mine asked how to tell if she had a good doctor. "If I were
you," I said, "I would look for these three basic qualities":

You
know you’ve hit the jack pot when your doctor rates high on all three.
I’ve had two doctors like that in my life, both gifts from heaven. Several were really awful. Picture this….

Scene 1: Doctor's examining room, mid-town Manhattan. Thirty-something, I sit on the examining table, my legs dangle over the side. I wear a paper shmata. My husband is standing next to me. The tall physician in his crisp lab coat faces us.

Doctor: I believe you have lupus.

Doctor: [With a wise-guy sneer] Why are you crying? It could be worse.

My husband and I get up and leave, never to return.

Scene 2: (A couple of years later in Buffalo, NY)  Doctor's examining room. I sit on the examining table, my legs dangle over the side, wearing that same stupid paper thing they have the nerve to call a gown.

Doctor: Clearly the disease has progressed. There's not much we can do except hope the medication turns it around.

Doctor: [Nervously] You seem anxious. There's no reason to be anxious. Maybe you should see a psychiatrist.

Me: [Angry] You're telling me the disease is unchecked and you wonder why I'm anxious?

The first doctor I fired. The second I kept. It was a close call but I kept him. Let me explain.

In the scenarios above, the first doctor, a rheumatologist, flunked because he not only sucked at communication, he lacked intellectual curiosity. Underneath my distress I didn't think I had lupus, I didn't know what I had but it wasn't lupus. He didn't care. He wasn't going to discuss it with me. He was already thinking about his next case. Deal breaker.

Doctor number two, also a rheumatologist, had all the right credentials, a super sharp mind and the curiosity of Sherlock Holmes. He was more scientist than clinician. Doc 2 probably communicated great with lab rats; it was people he couldn't handle. His nursing and office staff were tops, always accommodating and respectful of my time. He would listen to me as long as I reported 'just the facts' like Mr. Spock. I was a 'fascinating case' (how many times have you heard that old line?) and thus worthy of his attention.

Keep him or let him go?

I also had to consider that my options weren't as great in Buffalo as they were in New York City. There was maybe two other rheumatologists in the area capable of dealing with my condition and they were both trained by Doc 2.

A few more things to keep in mind:

>If you are in doubt, interview several doctors as if they were applying
for a job and you are the employer. If you don’t feel comfortable with your doctor or what s/he is telling you, get a second
opinion. Don't even worry about hurting anyone's feelings. They are
professionals and can handle it. If they can't and give you a hard
time, run, do not walk, to the nearest exit.

>Only the actual physical examination needs to be done in the examining room with you in a hospital gown. Any good-enough doctor would allow you to change into street clothes and sit comfortably in a chair for the important post-exam conversation.

>If you want the best, search for you doctor among the medical faculty of a
teaching hospital. Medical centers tied to a medical school, teaching hospitals are where the medical students and residents do their training. The faculty who teach and supervise there know the latest diagnostic procedures, tests and treatments because they have to teach it. Putting up with the gaggle of med students (who make Doogie Howser look like a geezer) is worth it, as long as your doctor hears you.

>A good-enough doctor will admit
when he/she doesn't have the answer but will work with you to figure
out a plan, maybe even try something experimental if you're willing.
Trust your gut. Filter
out what others say, focus on what your physician is saying and make your own judgment. Don't micromanage your doctor, but don't just be a Yes person either.

>A good listening doctor should not be touchy-feely. If you need someone to pet you and say "Poor baby," (and we all do) go to your mother, a friend or your spouse. Don't expect it from your doctor.

>Remember that doctors, just like the rest of us, are rarely
perfect. If you found one who is good-enough, celebrate and get to work.

So I kept Doc 2, even though he had the social IQ of a kumquat. He was an expert on my disease and as long as our conversations focused on that we were good. We decided on an experimental treatment that (knock on wood) worked. He's a big reason I've
been in remission this long. Go figure.