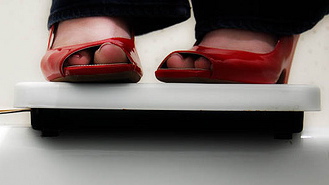 Do you ever have 'fat' days? I know, I know… Is the Pope Catholic?

Yesterday I felt fat. My mind was convinced I had gained back every single pound I lost over the last three months. It took effort to talk back to my mind. I said, "Mind, that's impossible. Even if you gained a few pounds since Sunday, it's nothing. You really did lose that weight and you have been eating responsibly. Cut it out!"

This morning I did something I usually resist doing. I weighed myself. I decided it was better to just know what I was dealing with. The scale said 145.0, down half a pound since Sunday. Was I happy? Hell, no! I got off and back on three times, convinced my scale was blatantly lying to me! I was actually looking for a higher number! Who does that?

Clearly that strategy didn't work. I should have known better. Living and dying by the scale, not a good idea. I still feel big. Is it the heat? We don't have air conditioning and there's another heat wave going on. Is it a matter of saying goodbye to the weight lost? Why am I 'holding on" to it? Am I afraid? I thought I was done with that. Hmmm.

There is a degree of self-criticism going on here. I've always been an ectomorph (I think that's the right term.) My body resembles a rectangle, small breasts, flat butt, thick waist. In a better mood I would say it's an athletic body, good for throwing javelins, riding horses. When I'm overweight the rectangle just gets bigger all over, which I'm told is a good way to gain weight. The ectomorph hides extra pounds well.

Now that I've lost weight the opposite seems to be true as well. My body hides the weight loss too. Well, that stinks. I was hoping I'd morph into Audrey Hepburn and instead I still look more like a tree trunk.

OK, that is enough! Somehow I got sucked into hating my body again (probably from reading too many fashion magazines. Damn you, September Vogue! How you tempt me!) and even I know that is so unhealthy! My body has gotten me through thick and thin. (Arg! I didn't just say that…)

What I mean to say is… My body is my friend, my dear, dear friend. It has been through emotional wars with me, fought the battles of illness, death and hardship. It has also given me joy through communicating to me the gifts of the universe through my senses. It made my children, for God's sake! I love my body, no matter what size it is in.

There. That's a much better place to be. Now that that insanity is over, I think I'll go take my body for a much deserved mani-pedi! Care to join me?