The Awesome Role Models in My Mother’s Sewing Circle 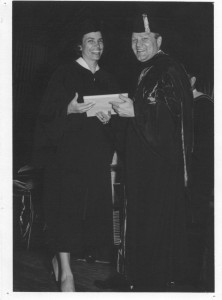 My mother passed away over ten years ago. Unbelievable! Her colorful, bring-it-on spirit continues to inspire me. But she wasn’t the only role model close by while I was growing up. There was a whole tribe of amazing women. They all had one thing in common. They were all ex-patriates of one kind or another. Strangers in a strange land, they adapted and thrived. In honor of my Mom’s birthday here is my little tribute to them all.

Back in the last half of the last century the Menninger Foundation and Clinic was a cutting edge international center for the study and treatment of mental illness. My father was one of many professional who flocked to Topeka, Kansas from all over the world to train and work.

My parents were from Colombia, South America. A physician, my father wanted to become a psychoanalyst. When he was accepted to do his psychiatric residency at the Menninger Foundation program, my Mom broke down in tears. Bogota in the early 1950s was a little Paris, sophisticated and cosmopolitan. All she knew of Kansas was from Hollywood Westerns. She was convinced her little family would perish in such a hostile environment.

The Menninger community became a society within a society. My parents’ friends came from places like England, France, Argentina, Chile, Indonesia, Egypt, Scotland, Guatemala and, most foreign of all, New York City!

The women of this micro-United Nations, were brave, strong women who made being exiled from their original homes look easy. They learned a new language, to drive, to cook (many of these women came from cultures where servants and nannies were part of the family home.) Far away from their extended families and familiar support systems they created their own in each other. They would congregate once in a while in “sewing circles” which I remember viewing from the height of a four year old. Laughter and movement is what I remember most. These women did not sit still for long.

Many of my Mom’s friends were in Kansas originally because their husbands studied and worked at the Clinic. After all, it was the fifties and sixties. But some, quietly, or in the avant guard of the women’s’ movement, had the guts to act on ambitions of their own. They studied and became nurses, psychologists, social workers, physicians, teachers and business women. Other’s were community organizers, philanthropists, volunteers.

My own mother came to this country with very little English. Back in Colombia she studied French as a second language, not terribly useful in Eastern Kansas. Although she had the American equivalent of a B.A. she went back to high school to learn English, continued through University and earned a Masters degree. Eventually she got her dream job, teaching Spanish literature at Washburn University. All while rearing five kids and dealing with a high maintenance husband!

These women, my mother and my aunts-of-the-spirit, their courage, tenacity, love of work and family, killer senses of humor and intellectual curiosity: Thank God for them! I owe each one a great deal and hold them close to my heart always.