Parenting and Food: “Should You Eat That?” 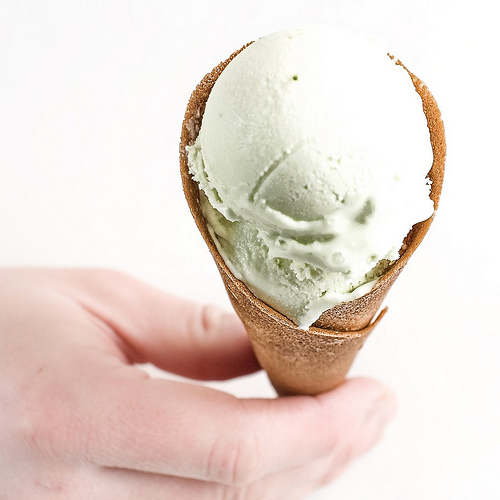 When my kids were little and we'd be out and about doing errands, every once in a while I would say, "How about stopping for ice cream?" Imagine the shock and disappointment when the response was, "No, thanks, Mom." Honestly, I am telling you the truth. This happened more than once. It's still happening! Talk about role reversal.

My choice was to face the fact that it was me who wanted ice cream, not my kids, or go into denial and try to talk them into an Anderson's drive-by. Reality won. I didn't want to create in my kids the same reward-dependence relationship I have with food. We went home.

Because my parents unfortunately made me super self-conscious of every bite I took, I knew it was not something I wanted to do to my kids. Yet the pull is there.  Until my son was ten or so he was a vegetarian, not by philosophy, he just hated the texture of meat. Until she was five or so, my daughter seemed to thrive on air. Both of them have always been of healthy weight, the pediatrician assured me all was well. So I try to focus on being as good a food relationship role model as I can.

Frank Bruni, in his article "Eat Your Peas. Or Don't. Whatever." says that's pretty much what diet and nutrition experts recommend:

They say parents can and should encourage sensible eating and vigorous physical activity by engaging in both themselves; children are likely to imitate those behaviors.

Whether
parents allow junk food or not, they should make sure healthier
alternatives are even more available — and should promote them. They
should also make time for family dinners, the nutritional content of
which they can monitor more carefully than they can a quick meal in an
economical restaurant.

And
by actually involving children in the shopping for, and cooking of,
meals, some parents have successfully given them a consciousness about
food — and a way to think about it — that guards against an abuse or
disregard of it. When
it comes to over-eaters who clearly thrill to that gluttony, it’s vital
for parents to try to find some replacement activity — a hobby, say —
that affords similar emotional gratification.

“Food lights some people up more than it lights other people up,” Dr. Bulik said. “We’re not born the same.”

Food lights me up like the Statue of Liberty's torch on the Fourth of July while for my kids it's more like a Roman candle. They are easily distracted away from the food that I find it way too much the focus of my existence. They made my job pretty easy, all I had to do was stay out of their way.

For many parents this food/child interface is much more complicated. Aside from addressing our own relationship with food, I recommend to parents of over-weight or food obsessed kids that they consult a qualified nutritionist. You may not ever have to bring the child in. The consultation can be just for you as parents to get a sense of what's reasonable and healthy to expect from your child. Find a nutritionist through your pediatrician, one who has the right credentials. At a minimum look for an independent Registered Dietitian (RD), one who is not affiliated with a particular product or program. You and your spouse could get some good advice, a plan of action that could put everyone at ease about food so that everyone can really enjoy it again.