When Asked, Don’t Panic: Just Say “I’ll think about it.” Then say No. 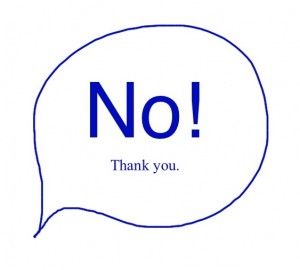 Last week I was asked to serve on the board of the local chapter of the psychological association as president-elect. They were in a bind because the president-elect they thought they had couldn’t finish her term. I rather liked being called in to be the pinch hitter. Sort of like the runner up to Miss America. But before I accepted the position I did some thinking. *Dissolve to flash back*

Ten years ago I picked up the phone in my kitchen. The president of the psychological association at the time was a friend of mine. She asked if I would take the same post. Over the phone she said it wasn’t a big deal; you reside over some meetings, facilitate projects, blah blah blah. The feeling I had as I listened to her wasn’t honor or pride. It was pure panic. My children were little, my parents were living with me, my husband was going through a rough time at work, I had a chronic illness, I had a job… Maybe this sounds familiar?

I could not possibly do one more thing without dissolving into a tiny pile of ashes and blowing away. And yet I thought about it!

Finally I did the right thing and turned down the position. I told my friend I would serve as president some day but not now. What I remember was the guilt I felt saying No. Can you believe it? I am no martyr, believe me, so what the heck?!

*Dissolve to further flash back* Fifteen years ago my family enjoyed a neighborhood block party. Picture this: A lovely autumn day, the leaves bright oranges, yellows and reds falling like snow flakes. The kids ride their decorated bikes, play in the bouncy house and eat homemade cookies while parents smile and drink beer.

The supermom who always pulled the block party together got everyone’s attention. She announced that this was her last year as block party coordinator. She decided the best way to find the next coordinator was to have a raffle! She took it upon herself to throw everyone’s (meaning of course all the women’s) names in a hat for a drawing. Isn’t this fun?

Oh. My. God. Panic! Somehow I knew my name was going to be called. I was going to be embarrassed in front of the entire neighborhood when I said No. And that’s exactly what happened. It was awful. Looking back, why didn’t I get mad? I mean, the nerve of this woman, right? But no, instead I felt the familiar guilt that I was letting my neighborhood down because I couldn’t do it all. Somehow I managed to say No although I apologized a LOT as I said it.

*Flash forward to the present.* A few days ago I accepted the president-elect position calmly and confidently. Next year I will be a new empty nester in need of a diversion. My parents passed away many years ago, my husband and I both have work that is hard but fulfilling. The time is right.

There was an article in the Sunday paper about Hillary Clinton being passionate about taking an entire year off. Imagine having days and days before you without responsibility or obligation, guilt free! After decades of service you can watch all the episodes of ‘Love It or List It!’ you want (apparently a Hillary favorite) and sleep until Noon.

We don’t all have to be a former First Lady/Senator/Secretary of State to deserve a sabbatical. Every one of us who ever raised a child, cared for elderly parents, nursed our own health, sustained a job, served as a community volunteer, put dinner on the table, did our bit as a good partner – all of us deserve our time to refresh.

So no more guilt when you need to say No! Listen to your inner voice. If it sounds at all stressed or panicked when someone asks you to do “one more thing” say No first and ask questions later. Or at the very least say a polite “I’ll think about it.”

If that’s too hard for you then give me a call and we’ll learn to say No together.