5 Steps To Stop Being The Family Scapegoat

Are you your family’s scapegoat? How would you know? Do you find yourself on the defensive a lot? Do you hear stories, first or second hand, from various members of the family about your bad behavior? Stories that are very old, or not true or at best, exaggerated? Or maybe they are partially true but important bits of information are left out? 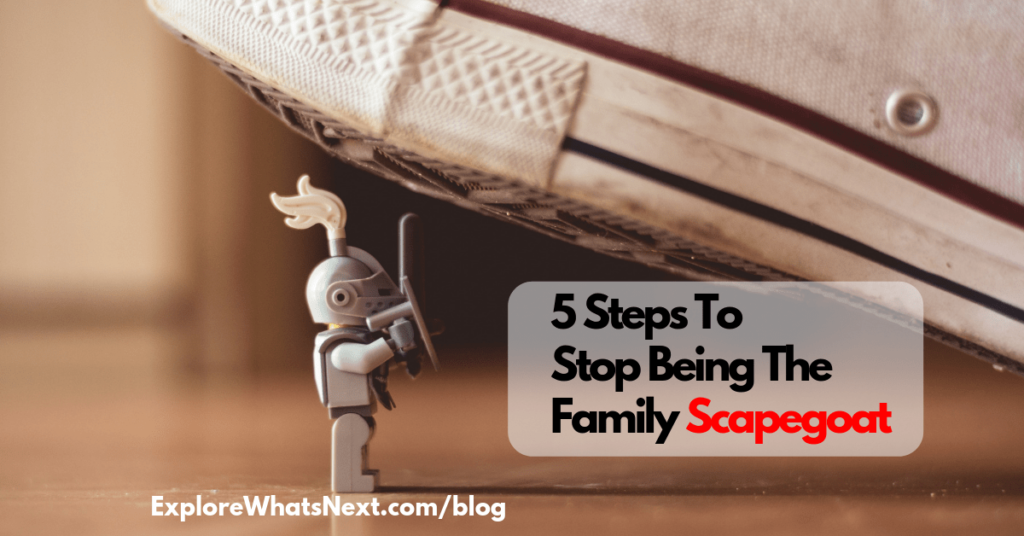 A friend of mine couldn’t figure out why, when she went to visit her elderly parents who lived outside of Western New York, she was often marginalized. When she asked questions about her parents’ doctors appointments or issues of financial security, she was put off, told it was all taken care of, not to be concerned, which if course, concerned her even more. Later, she would run into extended family members who would say rather angrily, “well, it must be nice to live far away and not be bothered with the health and financial concerns of the family”. No matter what my friend did it was the wrong thing. It was an old painful pattern, but finally, after much self-reflective work, she asked herself, what was going on?

She was the family scapegoat. As Sarah Swenson explains in her article, Scapegoating in Dysfunctional Families, the dysfunctional family system zeros in on an innocent on which to hang all their messed up issues. Mom’s unhappy? Well, it’s because her daughter won’t hop to every time she needs something. A sister is angry at being disrespected? It’s always the scapegoat’s fault for being “too busy to call.” Never mind that the mother is completely able-bodied and the sister is totally capable of initiating a call or texting. Their unhappiness is all the scapegoat’s fault.

The point is to burden the scapegoat with the responsibility and guilt for the family’s woes so that the people who really are responsible don’t have to deal.

As Ms Swenson points out, the scapegoat is usually the most psychologically strong, the most accomplished person in the family’s circle. That leaves the scapegoated person to wonder, do they target me because they’re jealous? That might be, but it could also be because it is more justifiable, in a twisted way, to project intolerable internal discomfort onto a strong recipient. What satisfaction is there in beating up a weakling? A fragile scapegoat wouldn’t last long and the person doing the scapegoating would end up feeling sorry for them which would defeat the whole purpose.

Slowly, with the support of good internal resources, therapy, and an empathic husband, my friend came to realize it was unlikely she would ever change the attitude of her sister or her mother. They would continue to blame her for the anger, bitterness and unhappiness in their lives. The power my friend had was to choose not to accept the unjustified blame anymore.

5 Steps to Stop Being the Family Scapegoat

5 Tips If You Love Someone Who Has a Mental Illness

8 Steps to Stop Cognitive Distortions… or at least slow them down.