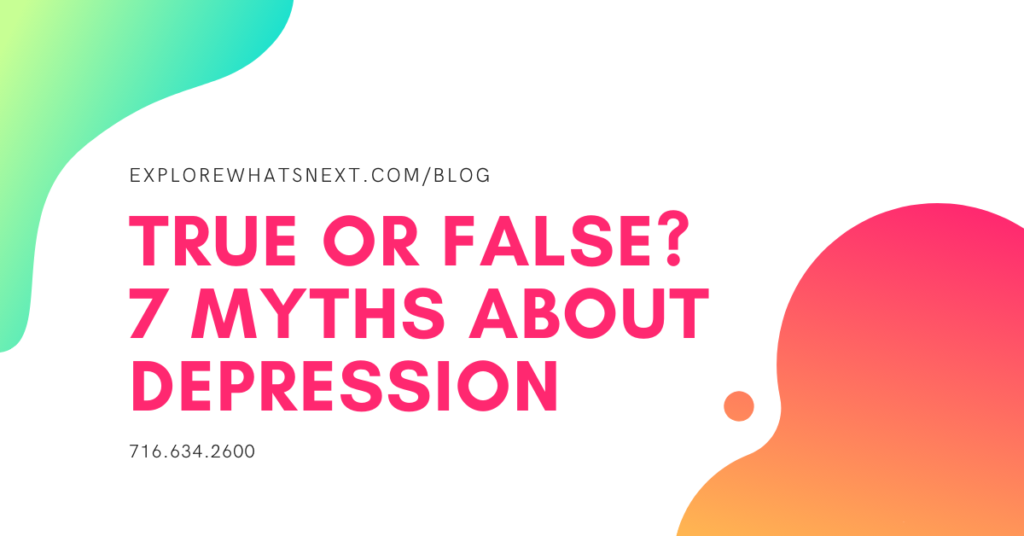 If depression doesn’t effect you, chances are it effects or will effect someone you love. Preconceived notions of the nature of depression can make the depression worse. It isn’t uncommon for people with depression to believe they should be able to snap out of it on their own. By the time they call me they feel like they’ve failed; not realizing that the depression literally has a mind of its own and seeking proper treatment sooner defeats it faster. Too often people believe that if only they were stronger they could get out of the pit on their own. Allowing such thoughts to go unchallenged is like allowing someone to kick you, hard, when you’re already down.

This list of myths about depression collected by John Grohol, PsychCentral founder and CEO, and his responses help to dispel some of these notions. He neatly explains why they are all false and what better, more sound thinking consists of:

Depression can strike anyone, at any time —
whether you’re “weak” or strong, it knows no bounds. Some of the
strongest people I’ve met are people who’ve coped with depression in
their lives.

While it has neurobiological components, it is no more of a pure
medical disease than ADHD
or any other mental disorder. Treatment of depression that focuses
solely on its medical or physical components — e.g., through medications alone — often results in failure. Get to know the risk factors for depression.

3. Depression is just an extreme form of sadness or grief.

If [depression] were ordinary sadness or grief, most people would feel
better just over time. In depression, time alone doesn’t help, nor does
willpower (”Pull yourself up and stop feeling so sorry for yourself!”).
Depression is overwhelming feelings of sadness and hopelessness, every
day, for no reason whatsoever.

While … more women than men
are diagnosed with depression, men suffer for it all the more since
many people in society believe that men shouldn’t show signs of
weakness (even a man’s own upbringing may reinforce such messages).  …depression is not a normal
part of the aging process. In fact, teenagers and young adults grapple
with depression just as much as seniors do. …successful people have also had to deal with depression, people such as
Abraham Lincoln, Theodore Roosevelt, Winston Churchill, George Patton,
Sir Isaac Newton, Stephen Hawking, Charles Darwin, J.P. Morgan and
Michelangelo. …being a loser is not a prerequisite to being depressed.

5. I’ll have to be on medications or in treatment for the rest of my life.

6. All I need is an antidepressant to treat depression effectively.

Sorry, no, it’s not as easy as popping a pill. While certainly you
can have an antidepressant medication quickly prescribed to you by your
primary care physician, you’re unlikely to feel any beneficial effects
from that medication for 6 or more weeks in most cases. In two-thirds of patients, that first medication won’t even work! Combined psychotherapy treatment with medication is the recommended gold standard for the treatment of depression. Anything else is going to be significantly less effective, meaning most people will suffer with their depressive symptoms longer than they need to.

7. I’m doomed! My parents (or grandparents or great uncle) had depression, …isn’t it inherited?

While researchers continue to explore the neurobiology of
mental disorders like depression, having a relative with depression
only marginally increases your risk for getting depression (10 to 15%).

How To Break Up With Someone: 10 Tips

6 Ways How to Manage the Holidays With an Eating Disorder