Like many women, with the #metoo movement growing stronger and more vocal, I reflected on my own workplace experience. Did I ever experience sexual harassment or assault?  Experiences that I pushed down into silence because no one would believe me? No memories bubbled up as being overtly sexual but that didn’t mean there weren’t incidents of harassment or abusive behavior, especially in my early career. The basic truth is that abuse is abuse, whether it’s verbal, sexual, physical, psychological, the gaslighting kind or the emotional blackmailing kind. Harassment and abuse does severe damage to our confidence and sense of self-worth. In that spirit, and in support of the #metoo movement, here is my article on Surviving the Abusive Boss.

At the interview for my first professional job, my future abusive boss asked me, “I notice you’re married. Are you planning to get pregnant?” After I picked my jaw off the floor I stammered, “Uh… no?”

It was a totally illegal question and the shocker was it came from a woman. What I should have done was run screaming for the nearest exit. But the job was offered, I took it and three years later I quit with a raging case of Post-Traumatic Boss Disorder. 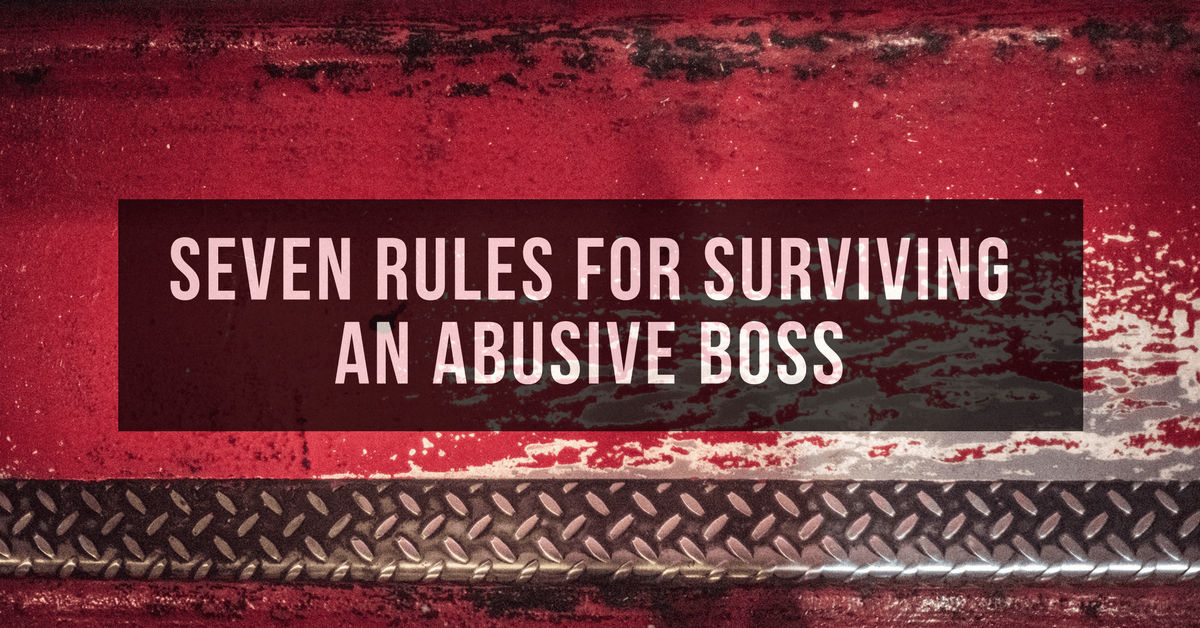 Rule #1: How you are treated from ‘go’ is a good indicator of how you will be treated on the job. The first phone call, your interview, how an offer is made and how negotiations are handled…

My abusive boss made me think I was her confidant. She gave me the plum jobs and ‘confided’ to me that everyone else was inferior. I was young, naive and, frankly, full of myself. For two years my feet hardly touched the ground.

It didn’t last. The Boss-zilla is a soul-sucking manipulator of narcissistic proportions. He hooks you in with compliments and seductive ‘let’s be friends’ invitations. First you are the golden child, held above all others and then he tears out your heart and shows it to you while it’s still pumping..… uh… Did I say that out loud?

Rule #2: Keep a healthy distance. You cannot be friends with your boss.

Into the third year, my work was bounced back to me bleeding red edits. My abusive boss started calling me into her office for ‘feedback’ sessions that got more and more humiliating. How did I lose my touch? Answer: I didn’t. I was the same hard-working nerd I always was; it was my boss’s attitude toward me that had changed.

Rule #3: You are neither all good nor all bad.

My co-workers hated me. As long as I was the ‘good’ one I didn’t care. When things went south I couldn’t take being isolated anymore and I started talking with other staff. Generously they forgave me and shared their own horror stories of abuse from my abusive boss. What an eye opener!

They don’t have to be your friends but you should be able to compare notes just like siblings do about their parents. Dysfunctional abusive bosses often use the old divide and conquer game to keep staff malleable.

Once I realized it wasn’t me, that it was a sick, dysfunctional corporate culture that allowed my boss to be abusive, I had a decision to make. My moment of truth came when I realized I had become someone I didn’t recognize and didn’t like. Depressed, obsequious, timid, who was this person? I wanted my spirit back and the only way for me was to leave. So I quit. That sounds easy. It wasn’t. It took months to find a job that felt like a good move, not a big step backwards.

Rule #5: Learn to define yourself by who are, not what you do.

Or “Don’t forget to have a life.” A lot of us were raised to think our end-all and be-all is our occupation. The first thing we tend to ask each other after being introduced is, “So what do you do?” I’ve had clients, grown men miserable in their jobs, shrink from the idea of quitting primarily because they have no idea who they are without the job. Family and friends (my husband was great at this) help us remember we are parents, church and temple members, coaches, thinkers, readers, spouses, travelers, life adventurers and more. These roles are constant no matter what the job is.

Rule #6: Always remember you have options; quitting is only one of them.

If you think you don’t, you will become depressed, a burnt-out shadow of your former self. Find a psychologist, life coach or career counselor to help you regain the perspective you’ve lost in abusive boss hell.

I don’t know anyone who doesn’t have at least one Boss-zilla story. A power-mad night supervisor at Taco Bell or a VP at a Fortune 500 company, it’s all the same. Post-traumatic Boss Disorder (PTBD) is no joke. It took me a good year to stop shaking every time my new boss asked me to his office for a conference.

Giving notice to Boss-zilla was as bad as I thought it was going to be. She called me ungrateful; I was told my poor performance would follow me wherever I went. What kept me calm throughout her tantrum was knowing my new job was at a very prestigious institution, which had to be killing her. She didn’t need to know there was no salary increase.

PTBD struck again many years later. Older and wiser, I recognized the signs early and took action quicker than before. From then on I’ve been self-employed. Today I’m happy to say my boss is usually pretty reasonable.

If you found this article to be helpful, you may enjoy reading one of these posts.

Am I Depressed or Just Surrounded by #!%holes?