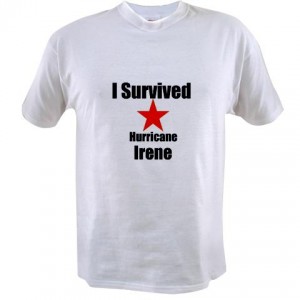 Because my son starts college at NYU next week, we were scheduled to move him into his dormatory in the West Village of Manhattan today. Responsible admins at NYU postponed moving day to Monday. That was fine for what it was worth. We still had to get from Western New York to NYC with all his stuff (by the way, I haven’t seen more Stuff in relation to my child since he was an infant and we couldn’t go anywhere without two carry-alls and a stroller!) When were we going to do that? The day before moving in day? I don’t think so!

We got to my cousin’s house in NYC well ahead of the storm but not ahead of the hyperbolic news announcers. Or were they just being responsible? My son, as much as he was looking forward to starting his college career, began to doubt his parental units when he heard the radio announcer say “This is a very dangerous situation! No one alive today has seen a Category 3 hurricane in this part of the country!” What were we doing heading TOWARDS the path of a hurricane! Were we nuts?

Cautiously optimistic, not quite nuts, but we weren’t taking any chances. We kept a close ear to the official announcements. We did everything Bloomberg and company asked us to do: lay in enough provisions, food water and such, for a couple of days. Bring anything that could become a projectile inside. Raise anything precious off the ground that is in a possible flood area. And above all stay put, off the roads and streets, until the storm is really and truly gone. Tropical storms can be sneaky, calm one minute and wild the next.

My cousin’s house is on high ground in central Queens. She welcomed our company. There’s nothing nicer if you are going to be stranded than having people you enjoy hunkering down with you. We kept our spirits up with funny tweets on Twitter, movies that made us laugh (i.e. Kinky Boots) and music. So far we have power but are ready for that to go too. Books and magazines, a deck of cards, cats to play with (is there anything more entertaining than a cat and a string?) and food. Lots of food.

Did government officials exaggerate the danger of this storm to New York residents? It’s my opinion that they did their job. If you heard Bloomberg on the radio he sounded so calm as he asked people to heed the evacuation orders, he almost put you to sleep! Better safe than sorry in situations like this. How tragic would it have been if the hurricane was worse and no one was ready? My heart goes out to anyone who seriously suffered because of Irene – tragic deaths, injuries, property or trees damaged or lost. Without the early, steady and consistent leadership of our officials from the President to Mayor Bloomberg to the cops on the ground, it could have been so much worse. Even a downgraded hurricane carries quite a whollop!

So I decided I will get the t-shirt that says “Gratitude is the Best Attitude!”