A contradiction is defined as the opposition between two conflicting forces or ideas.

Recently, I’ve observed that on the issue of teenage pregnancy society possesses just one huge message of contradiction.

Let’s start at the beginning, shall we? 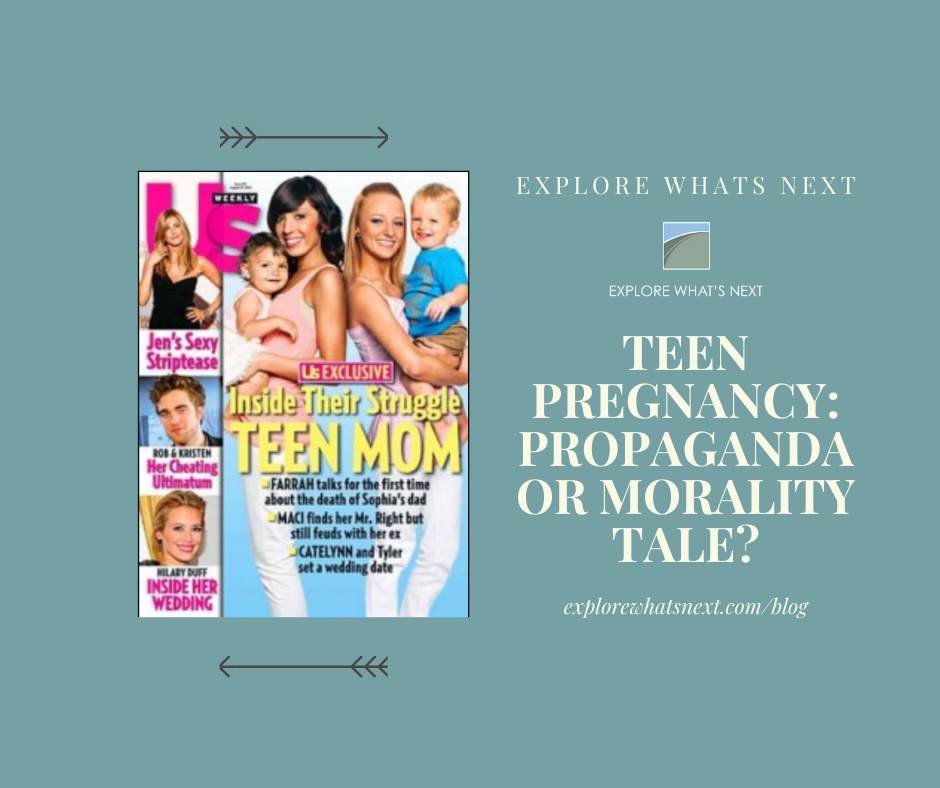 When you’re a just a child, a person drifting along through life without a care in the world there is never even any remote thought relating to or concerning the act of physical intimacy, as it should be. Then, you grow up and such ideas of purity and youth begin to be tested and questions start to arise. As you get more curious, the adults’ previous resolve to protect your innocence falters slightly. As kids we are suddenly faced with the issue of teen pregnancy!

Today, society does practically nothing to help steady parents’ nerves or to calm teenagers’ hormones.  Sure, schools always repeat the idea of abstinence and tell kids that teenage pregnancy is bad and will drastically alter your future. Adults tell kids that sex is a meaningful act that should only be performed with someone you love and when you are truly ready (and preferably older). However, the media completely out-weighs all of that sound advice by sending the seductive message that if teenage girls do become pregnant there is a possibility that it could make them famous!

For example, few years ago a new show was released on ABC Family, entitled The Secret Life of the American Teenager. The main storyline for the first season of the show was that a young high school student has a summer fling and becomes pregnant at band camp.

Oh yeah, it’s not even in Italy or some romantic place like that! It’s at band camp!

When I first saw the promo for the television show, needless to say, my jaw dropped. This had to be one of the most insulting things I had ever seen as a teenager.

The title itself is insulting, I mean, it’s saying that all American teenage girls do is sleep around and get pregnant.

Regardless of my disapproval of the promotion of Teen Pregnancy, the show aired, and apparently it was a smash hit. I was in eighth grade at the time and it was all my peers could talk about. Keep in mind these are twelve and thirteen-year-olds watching a show that is basically centered around the idea of teen pregnancy. It’s hard to even grasp the idea now when I’m sixteen that that was the sort of things kids watched, and still do watch now.

It’s okay though. I’m pretty sure once all the girls on that show get pregnant it’ll go off the air.

And it’s not only The Secret Life of the American Teenager. Television has aired reality shows about teenage girls who get pregnant for years and now in 2011 there is another one being added to the list. A show called Teen Mom has managed to make ripples in the publicity whirlpool, complete with tabloid covers broadcasting images of the teenagers, their children, and completely incompetent boyfriends.

This kind of thing is completely contradictory. First when we are young society tells us “Don’t have sex, or your hands will fall off!” and when we asked questions they’d say, “Just say no,” and leave it at that. Then as we grew up people began to educate us with the knowledge of STDs and teenage pregnancy, intending to scare us out of being intimate. But then society throws in a curveball.

With all of the magazine covers of Teen Mom drama and The Secret Life of the American Teenager episodes, kids are lulled into this idea that under-aged sex and teen pregnancy is what high school and adolescence is all about. None of them are factoring in the consequences or the meaning behind it, which, quite honestly, is just sad.