The Buzz on ‘Bossy’ and that other ‘B’ Word!

When was that Moment of Truth for you? When you realized there are certain words in our culture used almost exclusively to keep us down. Words like ‘Bossy!’

For me, it was when someone I love and trust called me that other word that starts with a ‘B.’ 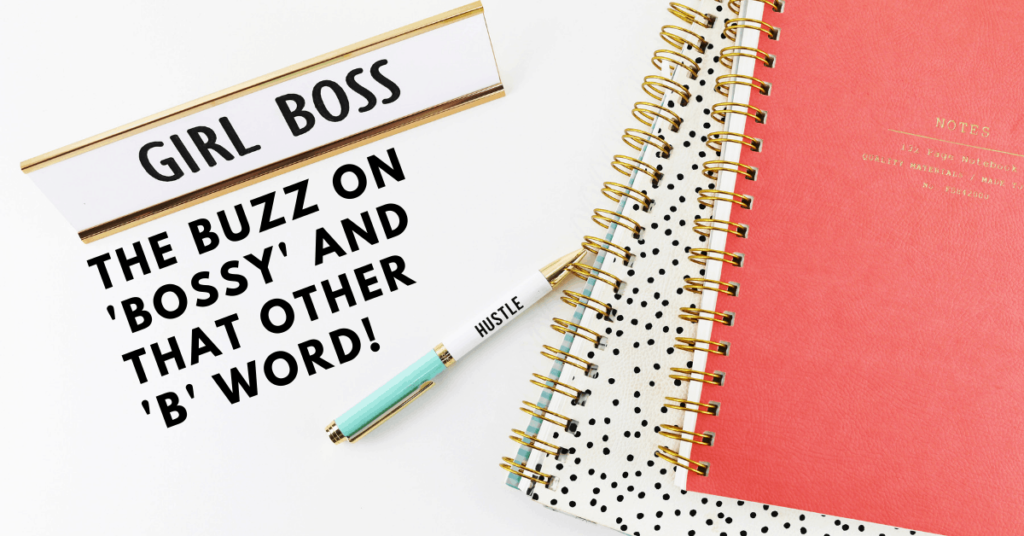 Many, many years ago when I was in graduate school, I took a road trip with my brother. We were driving from Kansas where my parents lived, back to the East Coast. We are only a year apart in age, pretty opinionated and, shall we say, vocal. Being cooped up in a car for over 12 hours can be a dangerous environment for siblings who don’t always see eye to eye no matter how much you love them.

The Buzz on ‘Bossy’ and that other ‘B’ Word!

I have no idea what the topic was we were talking so heatedly about. All I remember is we were arguing about something passionately when he said, “Why are you always such a b*#ch!”

He was driving so I couldn’t smack him. Furious, I turned to face my window and watched the countryside whiz by. After fuming for a bit, ever so slowly, a notion started forming in my mind. That word, that particular word, was code for “You are a girl. Girls should be nice. A girl expressing anger is a b&%ch.”

It took longer than that road trip for me to really solidify the personal significance of this revelation. But once I got it, it wasn’t such a leap to see all the other words that were meant to be spirit-crushing weapons directed specifically towards women.

Whoa, Slow Down! Keep it PG!

We like to keep things PG on this blog so I won’t go into the details but you all know what words I’m talking about!

The recent hoopla over ‘Bossy’ is interesting and has captured a lot of attention for a reason. It hits a sensitive nerve. Anyone who is authentically reasonable and nice is vulnerable to words that take that sense of identity away in such an underhanded way. Like being called “too sensitive,” or “too emotional” when all that really means is the other person is uncomfortable with emotion and wants you to stop.

On the other side of the fence, in sessions with clients, male or female, I often ask for clarification when a certain word is used that can be taken in different ways. It’s too easy to think we can read each other’s minds and make assumptions that aren’t true.

In the case of ‘bossy,’ if a client uses that, or similar, words to describe a female co-worker, supervisor, partner, sister or mother, I might ask: “Are you using ‘bossy’ as code for knowing her mind? Being assertive? Direct?” Which usually brings a laugh of recognition from the client, with a response that is sometimes “Yes, she was intense when she was angry but not in a nasty way. She was fair and knew her mind.” And sometimes “No, she was toxic, controlling. She could be mean.”

Why just pick on ‘bossy’? Today’s buzz around the banbossy.com campaign is OK, I guess. It certainly does no harm and may even help some people to watch how they use that word or how they hear it. I can’t say that I’ve heard ‘bossy’ exclusively used towards women, but when it’s used with a man in mind, I’m pretty sure it’s meant to be just as pejorative.

Isn’t any word used as a put down towards another abusive?

The other day, in a couples session, I asked a woman who just called her husband ‘crazy’ to stop and think about what she had done. What response could he possibly have to that except to get defensive? “I’m not crazy!” As I pointed out to both of them, there are certain words that are conversation stoppers, or worse, hurtful button pushers. Avoid them!

“Be impeccable in your word” is the 1st Agreement in traditional Toltec wisdom. When we do our best to use our words well, for good, we can change not only ourselves but influence those around us. Words have great power; white magic when delivered with openness and love, or black, when delivered from a place of fear or hate. That’s why that classic, old saying of “Think before you speak” remains true today.

Social Anxiety: When It’s ME against the world…