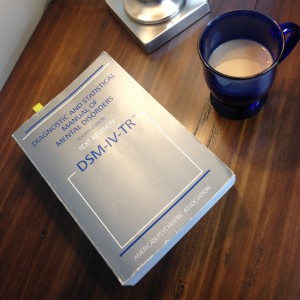 My first introduction to the Diagnostic Statistical Manual (DSM) published by the American Psychiatric Association (APA), was standing in the kitchen of my parent’s home and witnessing my father in full rant.

My Dad was a psychiatrist / psychoanalyst of the old school. Which is to say he was brilliant but also of his time. Which is to further say his fury was directed at the APA for taking homosexuality as a diagnosable mental illness out of the manual. It was 1973.

Hardly aware of what he was so upset about, I did hear him dramatically declare that he was withdrawing his membership to the APA. My Dad loved being a psychoanalyst / physician but he wasn’t that crazy (you should forgive the word) about being a psychiatrist. His prescription pad gathered dust as he focused on talk therapy. So his threat to quit the APA wasn’t idle but it wasn’t like he was giving up his beloved couch.

By the time I got to graduate school the DSM had gone through at least four more mutations. Partly because of my experience with my Dad but also because my Mom was addicted to the Merck Manual of Diagnosis and Treatment (in which every twinge or sore throat could become a sign of impending doom), I maintained a skeptic’s view of the DSM.

If the DSM really is the behavioral health professional’s Bible, then I was a doubting Thomas.

I’m comfortable with that. Take the latest edition, the DSM-5, finalized just a few days ago by the APA. I’m not overly excited about it because:

1. The DSM is subject to the times. For homosexuality to be taken out of the DSM in 1973, it had to have been in there in the first place, probably starting in 1952 when it was first compiled. Certain diagnoses can have their 15 minutes of fame just like humans. With such problems as hoarding, which was added to the DSM-5 lexicon, I have to wonder: Why?  Do we really need more diagnoses when the condition was fine where it was, as a sub-type of obsessive-compulsive disorder?

2. The DSM is subject to politics. Stakeholders like drug companies, insurance companies and researchers seeking grants to name a few, all have a serious interest in what is deemed a diagnosable mental illness.

3. A little knowledge can be a dangerous thing. From Homeland (bipolar) to The United States of Tara (dissociative identity disorder), I get the uneasy feeling that having a mental illness can be romanticized. When a character feels flat I imagine screenwriters in Hollywood asking themselves, “What will spice them up? Let’s look something up in the DSM!”

This is no joke when there are plenty of people who seriously suffer from these disorders and stigma is still such an issue. No matter how responsibly the media present mental illness there is still the danger that the regular person will assume they know everything when they only have one part of the elephant.

Do not get me wrong. I am not saying the DSM should be chucked out the window, baby, bath water and all. When I need to wade through differential diagnoses to get a clearer picture of what is going on with a patient, so that I can develop an appropriate treatment plan, I have turned to the DSM many times; but I was trained many years to be able to do that. If looking at the DSM doesn’t help, I call on a colleague who is much better at diagnostics than I am or once in a while I will do some strategic psychometric testing. This is how many clinicians on the ground use the DSM. Researchers need an even more fine tuned instrument to base their methodologies. It is all in the service of helping the patient, not in the questionable pleasure of labeling them.

The DSM has it’s place. It has gone a long way to help mental health professionals speak the same language, facilitate researchers in defining mental health issues to study how to best treat these conditions and helps many to understand themselves better. It is certainly better than nothing. I have great respect for the Herculean effort the committees of knowledgeable professionals had to put into this thing. They are the best in their field, but they, like my Dad, are creatures of their time and culture.

The DSM is a tool, like a hammer, or maybe more like a good Swiss Army Knife. You can use it to open a can of beans or you can cut yourself.

To read more on the specifics of the approved DSM 5 click here.