Christine Stapleton on the Fort Hood Massacre: A disturbed psychiatrist, a gun and the reality of war 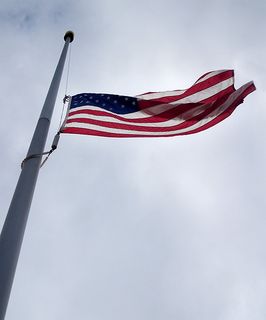 In our efforts to wrap our brains around a senseless event, we look for cause and effect. We desperately want to to see if we could have prevented it somehow. It’s only human to wish to control. Unfortunately that process can mean demonizing the perpetrator, making him a monster, something, anything, ‘not me.’

This morning I learned the gunman was a Muslim and a psychiatrist. While I have deep sympathy for the families of those killed and injured, I also have concern about possible backlash for Muslims and for mental health professionals as well.

Christine Stapleton, a reporter for The Palm Beach Post, expressed some of my concern in the wake of this horrible incident. As a therapist I have to be very aware of whether I am
metaphorically putting the oxygen mask on myself first so that I am capable of helping others. The US military is just now beginning to incorporate state of the art diagnosis and treatment of Post-Traumatic Stress Disorder for our combat troops. How are our front-line caregivers cared for?

Here is Ms. Stapleton’s article originally published today at Depression On My Mind. It’s too soon to know the answers to the hard questions she poses, but it is good that we ask.

I will go to my therapist’s office this afternoon. I will sit in the
waiting room and read an old magazine. Another client will walk from a
hallway that leads to my therapist’s office, pass through the waiting
room and leave. My therapist will poke her head out, smile and say:
“I’ll be with you in a minute.” After a  few minutes she will come back
and invite me into her office. I will walk in, notice Kleenex in the
waste basket and sit on the couch beside the box of Kleenex.

After a few pleasantries I will start unloading the detritus of my
soul. She always pays attention and looks interested. I am her last
patient on Friday. I cap off her week of listening to the detritus of
other peoples’ souls. I ask myself, who in their right freakin’ mind
would do this for a living? Hour after hour, day after day, week after
week, year after year, listening other peoples’ misery.

So I asked her. ”It does get to you,” she said and explained how she
takes care of herself. Burnout is a big problem among mental health
care providers, she said. Then I remembered Tony Soprano’s therapist
who had her own therapist on The Sopranos. It never dawned on me that a
therapist might have a therapist.

This morning I got to thinking about this after reading about the
gunman and his horrible rampage at Fort Hood yesterday. His name is
Maj. Nidal Malik Hasan and he is an Army psychiatrist. He also is
Muslim. Before he opened fire and killed 12 and wounded 31 people
yesterday he had been assigned to counsel soldiers returning from the
battlefields with post traumatic stress disorder. Hour after hour, day
after day, week after week he listened to the horrors and atrocities of
war. The soldiers he counseled were emotionally raw – just off the
battlefield.

Then Dr. Nidal Malik Hasan learned that the Army wanted to send him
to the very place where those horrors and atrocities occur. There was
the “Muslim issue”, too. The doctor is a practicing Muslim and he took
a lot of heat for it from his fellow soldiers. So much so that a couple
of years ago he retained a lawyer to help him get an early discharge
but learned he could not. He thought the U.S. should pull its troops
out of Afghanistan and often argued with others who supported the war.

The Army thought it was best to send Dr. Nidal Malik Hasan to the
battlefields where our soldiers are trying to kill terrorists who
practice that same religion as the doctor. And we all know how devoted
the terrorists are to their religion.

I am not condoning what Dr. Nidal Malik Hasan did yesterday. I am
not making excuses for him. I don’t know if any of this contributed to
what happened yesterday but I can see how it might have. I just want to
why. I want to know if it could have been prevented. I want to know if
the Army has anyone taking care of the people who take care of soldiers
who are devastated by war. Maybe it is time we all looked at our
caregivers and asked, what do THEY need? How are THEY holding up? Do
THEY need help too?