The Risk of Living Life With Passion 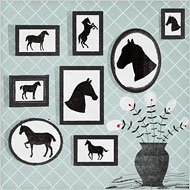 The New York Times Sunday edition has a column, Modern Love, where people write about all the different forms Love takes and how it has effected them personally.

Last Sunday's piece was "When My Mother Called Out the Posse."  I saw the image with the horse portraits and thought, "Goodie! Something about love of horses," grabbed a cup of tea and settled on the sofa for a pleasant read.

Brandon Lawniczak is a lawyer in Chicago. While raised on horses, he's not a horse person himself. He wrote:

The previous year my parents had moved from rural Michigan to Ocala, Fla., rolling land dotted with thoroughbred farms and strip malls…

Their 12-stall barn was attached to a one bedroom living quarters. On the property in Michigan where I'd grown up, the horse barn had been 600 feet away. Now the barn and house were under one roof – my mother's utopia.

Haven't we all dreamed of such a set up? Whether it's practical or not, anyone with a passion wants to live above the shop. I know quite a few therapists who have their offices in their homes. It works for them and I can understand the attraction. Because I'm way too distractable I couldn't do it. Every noise or scent would set off a chain reaction of thought neutrons, "Did the kid's come home from school? Did anyone feed the dog? What's he barking at anyway? Does my patient smell what we had for dinner last night?" Forget it. My husband, on the other hand, always imagined having an apartment over his lab, and I hope some day that's possible. I don't see him living over a barn, though.

Mr. Lawniczak goes on telling the story of his mother's love for horses and how she reacted when two of them were stolen from her barn. Eventually they were found and all was well. A happy ending, I thought, until the next paragraph:

A year later, my mother was thrown from her show gelding. She had been loping in the paddock when he shied and stopped unexpectedly. She slid along his withers and fell 16 hands to the ground and broke her femur just below the hip. All her life she had seen dangers lurking everywhere – tall buildings, bridges, tunnels – but the risk of cantering atop a tall steed seemed to elude her.

Rats. It upsets me to read about someone getting hurt while riding. I want to plug up my ears, close my eyes and hum 'America the Beautiful' to myself until it goes away. Hearing about car accidents or plane crashes prompts the same response. Not that I have a passion for cars or driving but I do have a passion for living and I don't intend to stop. Basically it's anxiety and, in this case, as a rider and horse owner, I don't like it.

Then I looked closer at what Mr. L. wrote. All her life she had seen dangers lurking everywhere – tall
buildings, bridges, tunnels – but the risk of cantering atop a tall
steed seemed to elude her.

His mother was a veteran horseman. Was it really possible that she was oblivious to the dangers of riding a fine, healthy animal that outweighed her by over a thousand pounds? Or is it more likely that she knew full well what the risks were, she simply made a choice to live her passion despite them? And what about her fear of infrastructure? She may have had a few
choice fears (what we in the biz call Simple Phobias if they get bad
enough) but she didn't love tunnels or bridges. She loved horses.

Dale Earnhardt, the crew of the Columbia space shuttle, come to mind. I figure they knew what could happen but the benefit of living their passion pushed them beyond the risk. Did that make them crazy?

What about my uncle who had a deep passion for Scotch? When he was diagnosed with cancer of the liver he said he'd rather die than live life without a drink.

Is living a life of passion like an addiction? Isn't that bordering on mental illness?

Where am I going with this? I'm not sure except that I see I've got a lot of questions and not a lot of answers. Even so, there are a few things I know.

I know that when I consider not riding ever again, a light in me dims. I know I take a risk and I contemplate what an injury or worse would do to my family. That's the responsible thing to do. Then I imagine the more insidious injury to them of living with a mother and wife who is emotionally diminished because fear made the decision for her.

Mr. L. came to a similar conclusion. Then he flipped the question of passion back on its head:

…the question I kept asking myself was this: What would it be like to have what my mother had?

…Life has given me much over the years for which I am extremely thankful, but I don't have that.

Somehow
that makes me sad. His mother was severely injured as a result of
living her passion but I'm not sorry for her. OK, that didn't come out right. I'm sorry she got hurt, but I feel compassion for her son who says he has never known
a similar kind of love.

If someone like that were in my office, assuming he came because he was unhappy with his lack of passion, we would talk about why this was. Is it possible passion is right under his nose but he doesn't see it? What is the quality of his relationships? What life experiences shaped him? Does anything hold him back? What about his work? Is it time for a change?

My work at Explore What's Next is often just that – helping people find, rediscover and live their passion. I love giving back what I've learned. It's rewarding work for all concerned and worth the risk.