The Significance of Walter Cronkite 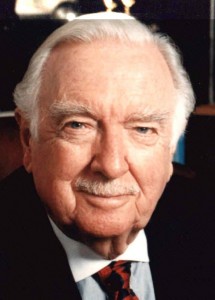 The Most Trusted Man In America.

Walter Cronkite really was above the rest and it wasn't by accident. He was what his PR said he was; professional, fair, intelligent, balanced, objective, respected. Trusted.

Like so pitifully few do today, he earned our trust and never let us down.

My family growing up was a CBS family.  Whose wasn't? My Mom watched her soaps on CBS every day and my Dad watched
Walter nightly. He was my Dad's age. He sort of reminded me of my Dad. My five year old self  could imagine curling up in his lap to read "Little Bear."

He defined professionalism, not just for journalists, but for professionals of all stripes. Can you imagine Walter Cronkite interrupting someone the way Bill O'Reilly
does all the time? Or lecture viewers with a smirk the way Keith
Olbermann does? No way. Walter was a straight up guy. He treated you like an adult and believed that the unpolished facts was all you needed to develop your own opinion.

Back in the day, television united us no matter where we lived. The Beatles on the Ed Sullivan show, watching Roger and Hammerstein's Cinderella (the one with Leslie Ann Warren) or the first episode of Roots. I grew up in Kansas. You may have grown up in Manhattan, Virginia, California or South Buffalo, it doesn't matter. If you're of a certain age we have these common memories, the sounds, the sights, the emotions.

One of my earliest memories is watching President Kennedy speak about the missile standoff with Cuba. My parents looked so solemn. I had no idea what was going on just that it was serious. Later it was Kennedy's assassination, the funeral and tears.  Throughout all of it was Walter Cronkite's comforting baritone. His dispassion was not perceived as unfeeling. The message came through as if from a very concerned mentor whose head governed his heart, but you always knew he had a heart. I don't know how he pulled it off. Training? Character? Belief in the principle of objectivity in reporting? He was all that rolled into one with a dose of hard work and compassion for his fellow humans.

Then there was 'And That's The Way It Was' a show for kids or I thought it was. Maybe it wasn't. Maybe Walter thought adults could use a little history lesson to keep from making dumb mistakes in the present. The angle was Walter Cronkite reporting historical events as if they were taking place today. It was hilarious and informative at the same time; Walter interviewed the engineer who designed the pyramids, with just the teeniest bit of a twinkle in his eye.

My kids have no idea what I'm talking about.

"He was a class act and it’s a sad day because he is gone."