Thoughts on Rules to Live and Eat By 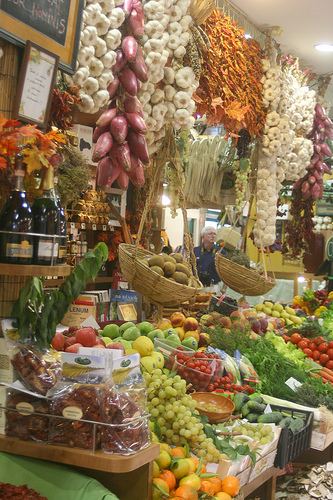 Two months ago I wrote Eight Mental & Physical Fitness Principles I Can Live With. I just re-read them because I needed a reminder. For whatever reason I am forever slipping and picking myself up again. Maybe the lesson here is that that's not so bad. Maybe slipping is OK as long as there's that golden mean we keep striving for. Perfection is a mean taskmaster, reasonableness is kind and nurturing.

Following that thought and guided by the sweet support from many friends on this blog and elsewhere, I am not going to get down on myself for being a bit up on weight. Like many people I went through a tough seasonal transition where the hibernation instinct pulls us to eat great big mounds of pasta and mashed potatoes. Deciding I'm beautiful no matter what the scale says (Principle #8), I didn't chain myself to the calorie counter for a month. Instead I listened to an inner voice of reason that allowed some indulgence (big bowls of popcorn traditionally popped in veggie oil) but drew the line when it came to cookies and brownies. I eat less cheese, upped my fruit intake and gave up coffee, not because of weight but because my insides feel better for the change.

Now I'm ready to go back to food journaling and exercise only in a kinder, gentler manner. This suits me, for now, until I slip again. Or maybe it's not a slip. Maybe it's a tactical realignment. Hm…something to think about.

As a non-caloric treat today I want to share this article by Michael Pollan: Rules to Eat By. It appeared in the New York Times Magazine last month. Pollan has been featured on this blog before (An Omnivore's Deduction). His writing on food and Americans' relationship to it, is simple, direct and plain spoken. He's like the Mark Twain of food journalism. His article shared twenty "rules to eat by" from the thousands that he's collected for his new book, Food Rules: An Eater's Manual (out in January '09). Here are five of my favorites:

"My parents are both from Italy, and one of our family rules was that you could not leave the table until you had finished your fruit…It was a great way to incorporate fruit into our diets and also helped satiate our sweet tooths, keeping us away from less healthful sweets." ~Marta C. LaRusso

"Never eat something that's pretending to be something else…no textured vegetable protein or veggie burgers (fake meat), no artificial sweeteners, no margarine (fake butter), no 'low fat' sour cream, no turkey bacon, no 'chocolate flavor sauce' tat doesn't contain chocolate…If I want something that tastes like meat or butter, I would rather have the real thing than some chemical concoction pretending to be more healthful." ~Sonya Legg

"Make and take your own lunch to work. My father has always dome this and so have I. It saves money, and you know what you are eating." ~Hope Donovan Rider

"One of my top rules for eating comes from economics. The law of diminishing marginal utility reminds me that each additional bite is generally less satisfying than the previous bite. This helps me slow down, savor the first bites,stop eating sooner. It also helps get plenty of variety in my diet because this rule also makes a meal of small plates more exciting…" ~Laura Kelly

"After spending some time with people with eating disorders, I came up with this rule: Don't create arbitrary rules for eating if their only purpose is to help you feel in control. I try to eat healthfully, but f there's a choice between eating ice cream and spending all day obsessing about eating ice cream, I'm going to eat the ice cream!" ~Laura Usher

You can read the entire article Rules to Eat By.