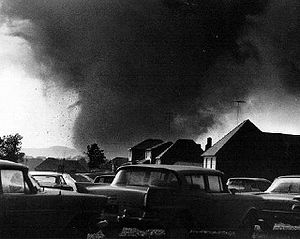 As I write this I am watching the television coverage of the killer tornado that tore through Moore, Oklahoma. It is beyond imagining what it is like to have your rock solid home, school, church or barn instantly disappear. The entire landscape as you knew it is gone, just gone. Right now the focus is on two schools where children sheltered from the storm. Seen from a helicopter hovering above them, swarms of rescue workers in their bright yellow jackets cover the rubble like bees.

When I was about twelve years old a category 5 tornado ripped through my hometown, Topeka, Kansas. That’s a photo of it above. The base of that tornado was a mile wide, which is considered enormous.  The Moore, OK tornado is said to have been at least as wide. In Topeka we were incredibly fortunate. Seventeen people died that night, a few from heart attacks. No one could believe that so few people were killed by such a huge storm. Everyone said it was a miracle.

Moore was hit harder and will need much more help in terms of money and emotional support. Already they are saying 51 people are confirmed dead with over one hundred injured. They expect to find more. An Oklahoma emergency services director being interviewed said it isn’t over. There are still tornado warnings out across the region.

People wonder around in a daze. I know what that glassy eyed look is. It’s disbelief, shock, the beginnings of grief.

Do not think you are helpless to help. Every single person who makes the effort does make a difference. That’s what a community does, come together in celebration and in heart break. Today in this small global village, we are all part of that community. We offer our hands, dollars,prayers and hearts to lift up those who have been knocked down so hard they can’t get up by themselves.

Tornado Disasters: How Can We Help?

Search for survivors continues in Oklahoma