From the Archives: 7 Ways to Give An Apology & 4 Ways to Accept One 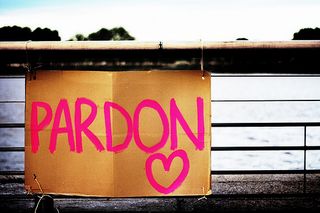 When
I was seven years old, preparing for my First Communion, I had to go to Confession first. Back in the day, that was a scary
prospect, involving a dark booth, hell’s fire and spilling your guts to
a shadow behind a screen. What does a seven-year-old self have to
confess?

I
knew exactly, because I was a convicted thief. I stole a fancy little
brush from Joyce Weber, my friend from down the street. I coveted that
pink and blue plastic brush and I took it! When she discovered my sin,
Mom marched me over to Joyce’s house to hand the brush back and
apologize, face to face. It was agonizing. What more penance could
there possibly be?

As
a dear friend said, "Apologizing sucks." Apologizing is uncomfortable,
at least if you are doing it right, but it is the pain of cleansing a
deep wound so that it can heal properly. Here are a few suggestions on
how to make a good apology:

Receiving an apology isn't easy either.

My mother wouldn’t allow me apologize to her. Yes, my mother had a double standard regarding apologies. She was a complicated woman. She was of the ‘love is never having to say you’re sorry’ school, but only when it came to hurting her
feelings, not those of others. Excuse me, but I always thought that was
so much doggy doo doo. If you can’t say you're sorry to those you love,
who can you say it to? What was I missing here? It was crazy making.

As the one usually doing the apologizing, this is what I appreciate from the person I’ve hurt:

Giving and accepting an apology with grace is just that. It’s
a blessed state for you both. For the one doing the apologizing – because
you chose to allow yourself to be vulnerable rather than get defensive.
For the one who accepts the apology – because you used your power over a
vulnerable soul with generosity of spirit instead of twisting the
knife. Now the healing can begin.

But
what about forgiveness?  For most if us humans, forgiveness is another
matter, involving trust, and that takes time to regenerate after a bad
hurt.

Please tell me what do you think about apologizing and apologies. I would love to hear from you.