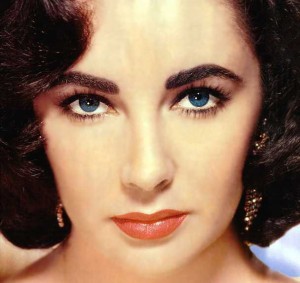 As glamorous as her life was, Elizabeth Taylor was a survivor. She experienced great physical and emotional pain, endured and overcame it all under the often unkind scrutiny of celebrity. When she turned 60 she said, “I’ve been lucky all my life. Everything was handed to me. Looks, fame, wealth, honors, love. I rarely had to fight for anything. But I’ve paid for that luck with disasters.”

She seemed to enjoy reminding people she wasn’t any more or less human than the rest of us, while thoroughly reveling in the privileges of stardom. Her passions were epic, yet she had her own code of ethics. Asked why she married so often she said, “I don’t know, honey. It sure beats the hell out of me.”

She was gorgeous, had a potty mouth and a loud laugh. “I know I’m vulgar,” she once said. “Would you have me any other way?”

What could we learn from Elizabeth Taylor and how she lived her life?

God bless you, Elizabeth Taylor. May you rest in peace.